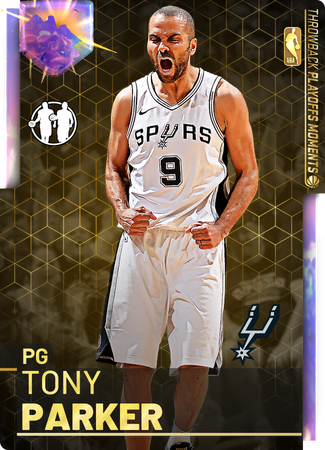 DO NOT PICK UP

I usually try to keep an open mind about cards and think that I must be using them wrong if I'm not doing well with them, but this card is terrible. In my regular lineup I run GO Derrick Rose at PG so I'm used to using a shorter point guard, but Rose is able to make up for his height in several other aspects of the game where simply this card can not. In all of my games of unlimited, every time Parker would get abused in the post and unfortunately it wasn't even by super tall players, I'm telling you this man was getting post spun on by JAMES HARDEN! He is a defensive liability and there's really no way to hide him on that side of the ball aside from running a zone which is essentially suicide if you're playing against a half decent player. Offensively he leaves a lot to be desired. Obviously in real life Tony Parker by no means had HOF Limitless but at this stage in the year there is no point running a guard that small that isn't an absolute sniper from 3. His floaters were surprisingly effective but floaters in general are trash this year so it's hard to use that as a reason to buy this card. His jumper is ok, nothing spectacular, more of the same from his off dribble. His dribble animations aren't bad either but again aren't enough to make up for the degree of difficulty it takes to get him open or the fact that he's simply a liability on defense. Oh yeah, and he doesn't have HOF Defensive stopper either...lol.

Bought for: Pulled in throwback playoff moments pack (Single, Opened at least 20 tho)

Recommended Strategy: Good luck, I got nothing

Other Comments: Honestly when the diamond Tony Parker released he was a lot more useable back then compared to now. If you used that card and think you get the same effectiveness now I would highly recommend considering a different point guard, especially with the amount of very cheap and very good guards there are on the auction block.

Use if: Spurs theme team or just an avid Tony Parker fan

Don't use if: You have a brain

Bottom Line: Unfortunately with how the meta is for the game right now I really don't see this card being useable in either unlimited or triple threat, you're just asking to get bullied by a GO Ben Simmons

finally someone willing to write a negative review of a card. thanks for being honest and not calling him a glitch or total cheese. nice review dude

I lobe how it's legal for cards to have weaknesses like size and missing badges. This 2k might be worse than last year.