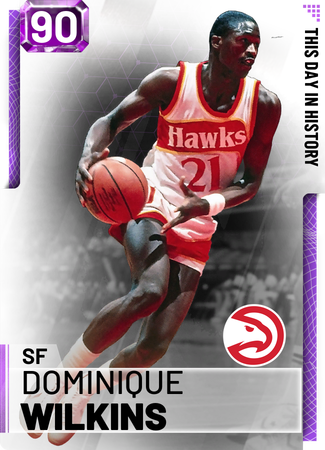 Good but I'd rather get tokens

-Me, getting the notification on my 1129$ iPhone X (euros but I'm using a Mac and I've never figured out how to do the euro on my keyboard because I'm a retard) : WOOOOOOOOOW, I want this card, I'm gonna enter the code ASAP ! And hey look, I forgot to enter the code from yesterday, I'll enter this one first.

-NBA 2K19 : Thanks sir for your code, you now have a chance to get a Knicks or Pacers historic pack with a guaranteed terrible sapphire. Now, throw the ball ! Oh sir, how unfortunate, your reward is a bronze shoe.

-Me : Yaaaaay, still nothing in these locker codes, nothing special tho. Now I'm gonna enter the code to try to get a chance to get a shot to maybe obtain this amethyst Wilkins. Well, I'll get a silver contract, but it's better than nothing. Let's throw that ball... OMFGQSLDSQLOE I just got Wilkins, that's crazy !!!! I'll take a look at his attributes... Huhhhhhh, I thought it was an amethyst, not a sapphire ? _

Now it's time to be a little bit more serious, and see how underwhelming this card is. Despite having an expensive phone, I'm not rich at all (just saved money and also have an amazing mom), so when you have the opportunity to get an amethyst at this stage of NBA 2K19, your favorite game currently, you just want to be totally lucky and get him. And this is what I did. But man... Looks can really be deceiving sometimes. This card is awful, not as a simple 2K card, but as an amethyst Wilkins card. By making an amethyst Wilkins card, you have so much potential to make an amazing and rare card between your hands. But in the end the card is just decent for an amethyst, and it's just so frustrating.

I mean, it's a rare card, not everyone is gonna be able to grab it for free like me or some other lucky people. So not only as someone from 2K, you have to make a good card to represent the awesome player Dominique Wilkins was, but also give it a little extra for being a card you can only get from luck.

You know, I'm not asking for this card to have a 95 3pt rating or anything like this. But at least give the exact same stats with 98 layup and dunk ratings, or the same inside scoring ratings but with an 80-85 mid shot rating.

Because yes, this card is amazing at finishing near the rim, but with no possible way to add an, at least, consistent outside scoring to your game with this card, your game's gonna be way too predictable. And then you're in the situation where this Wilkins is not good enough of an inside scorer to score every time you get in the paint, but you also can't fool your opponent with a little mid range shot once in a while.

So what ? Well, your opponent is gonna leave your Wilkins wide open, waiting for you to shoot from mid range, and miss most of the times, or to penetrate and he's not fast or good enough to throw it down on the whole opposite defense.

MJ is the GOAT though, but I digress.
I also pulled the card and it is not representative of Nique at all. It is an insult to everyone. Thanks for ruining one of the best finishers ever in the form of a very weak amethyst card who does nothing well.

I feel like none of these "This day in History" cards are gonna be good. They all have very underwhelming attributes, and seem way worse than they should be.
I also feel like you should get rewarded with better cards as the only way to pull them is to be lucky

This review gave me warp flashbacks

No one gives a fuck about your iphone dumbass