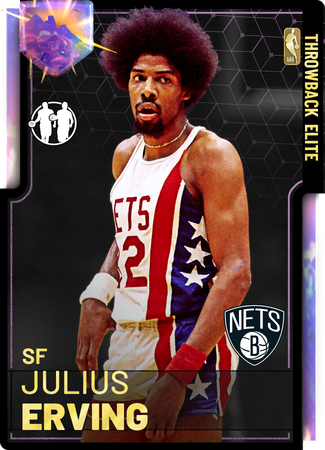 The Doctor is IN

Dr. Julius Erving is one of the greatest players of all time and this card really plays like one of the best cards in 2k19. The first thing you'll notice is his speed with the ball as Dr. J is one of the more athletic players and can easily out run most of the opposition in transition, dropping some absolutely unreal dunks or self alleyoops. But there's more to this card than meets the eye. He is an absolute green machine from 3. Sometimes I struggle with his release on off days but generally it is one of the easier releases to play with in my opinion. I think with Dr. J people don't think of him as a jumpshooter but trust me when I say this guy can hit shots from almost anywhere. His defense is also amazing and his athleticism really helps him get blocks and if he can poke the ball loose (which he usually can) he's gonna get to the ball before anyone else.

Recommended Strategy: You can run the offense through him and dominate people or you can run it through someone else and kick it out. He's cheesy running pick and rolls and pick and pops either as the screener or the ballhandler and if you get him out in transition it's almost always a bucket. He can do everything

Use if: You want a really good all-around player who can do absolutely everything (besides running center) and also due to the dynamic duo packs I believe his price has gone significantly down so he's much cheaper. Therefore if you're not lucky enough to pack him in dynamic duo, I think buying him is definitely worth it

Don't use if: Can't afford him, wanna run a big SF although honestly he can run SG, that's where I play him, maybe you won't like Dr. J's release but I don't know why you wouldn't use him

Bottom Line: I mean kind of an underrated card which is shocking because it is JULIUS ERVING but the Doctor is definitely the real deal 100%