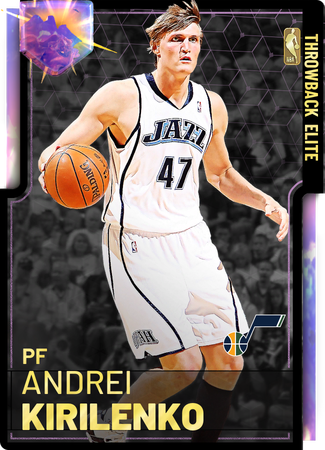 I haven't made a review for a while, but I knew that I had to make one after getting this card. I wasn't really expecting a lot out of him because usually I don't do well with players I just get, but this was a different story for this card. After a few games, these are my thoughts on this card.

-Release- He has the cheesiest release in MyTeam- Base 11. Base 11 has never been my favorite release because it was always a little to hard to time for me. My favorite release was the base that J.R. Smith and Rex Chapman have or Melo's release. But after using AK-47, I have to say his base 11 is my favorite release. I green so often with him and even if I don't green it, it still goes in.

-Leaner- Remember when 2k took away base 11 from Hedo Turkoglu? I remember DBG making a whole video crying over that and being sort of happy that he couldn't kill me anymore in Triple Threat, even though he still did. But DBG still loved using Hedo because of his amazing leaner. It is so hard to contest and is pretty quick. Well, AK-47 has that leaner. Combined with base 11, he has become the returned base 11 Hedo Turkoglu.

-Playmaking- You can play this card at point if you want to. With HOF Dimer and great playmaking stats, he is an incredible passer. He also has nice dribble animations, which adds to him being the returned base 11 Hedo.

-Defense- Great stats, great badges, great defensively. I run him at small forward because (1. I already have Big O and Russell Westbrook at the point guard with B-Roy and Dr. J at the shooting guard, (2. People run centers like Hakeem to duo with Yao at power forward and I don't want a 6'9" player like Ak-47 guarding them, but Dave Cowens is good because he is a center, and (3. People run great small forwards and Ak-47 acts like Kawhi Leonard on steroids against them offensively and defensively.

-Rebounds- Gets multiple offensive rebounds in Triple Threat and is definitely one of the better rebounders on my team.

-Inside Scoring- Great playmaking combined with 90 driving and contact dunk and HOF Posterizer make him a lethal slasher.

-Mid-Range- Definitely a great mid-range shooter, why would anyone put that as a weakness for any opal, let alone a base 11 player with Hedo's leaner?

-3pt- One of the things that makes him better than his diamond or pink diamond is that those versions don't even have gold deep-range or limitless. This card, with HOF Deep-Range and HOF Limitless makes him a way better shooter than his other versions, and you don't have to buy those badges for him.

-Only one: Size. He is a smaller player at only 6'9", especially at the power forward position. That is one of the reasons I run him at small forward as I sort of mentioned earlier in this review.

Recommended Strategy: Run at a position that he wont be so undersized at, use his leaner in tight situations, and shoot limitless threes.

Other Comments: This is my current team, give me suggestions on the power forward position. Also, comment if you want a review on Opal Oscar Robertson, KD, and Yao Ming. https://2kmtcentral.com/19/lineups/383905/seattle-supersonics-current

Use if: You want one of the most overpowered cards in the game.

Don't use if: Base 11 isn't the greatest for you, you don't have enough MT (in which case grind Triple Threat Online), or you don't need him.

Bottom Line: Insane player, definitely one of the greatest cards in the game.