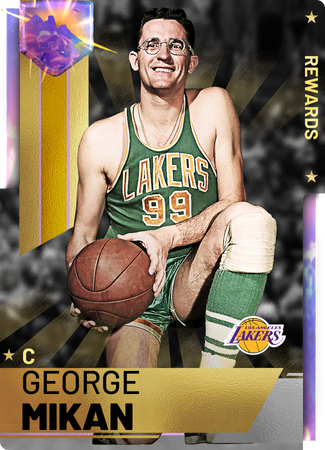 Recently, I decided to get Mikan as I enjoyed his pink diamond card earlier in the year. Additionally, I felt it was only right to add the player who was considered the first real star of the league. At the time of this review, there were less than 40 people who had redeemed this reward. It is the rarest card in the reward market. Since I know not everyone was playing the game long enough to even have a chance at the pink diamond card, I thought I would discuss how he plays. For the record, I only tried him in 5v5 situations including MTU. I did not use him in triple threat. I did add a CP3X shoe to him to increase contested 3, handling, and lateral quickness but had not added any badges.

Recommended Strategy: Pick and Pop, Attack in the post against smaller/weaker defenders, use to stretch the floor for slashers

Use if: You want a rare card, have tokens to spare, and want someone born in the 20s on your roster. In the proper situation, he could be invaluable in spacing the floor.

Don't use if: You only have the tokens for a few galaxy opal rewards and want the best possible cards in that reward tier.

Bottom Line: He is not the best available reward card or even best available center. Pink Diamond Sabonis would likely take that honor. However, he is good for spacing the floor and is not too weak in any area except perhaps height if played at center. To me, he seemed similar to Moses Malone except he gives up some athleticism for great outside shooting. He is also similar to Zydrunas Ilgauskas minus the height and with better athleticism.