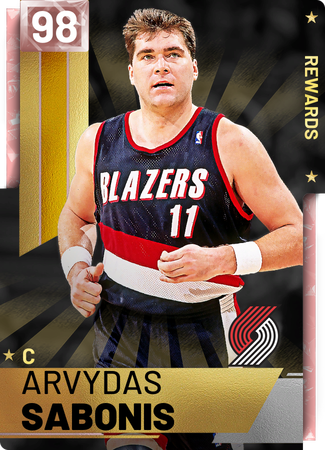 Sabonis has always been a player that intrigues me. When he came to the Trailblazers, he was an oddity. A man who was nearly the size of Shaq but who played a completely different game. He has become one of the leagues best "what if" stories due to not entering the NBA until his health was declining. When he was released as a pink diamond reward, he was my first purchase with 3000+ tokens over all galaxy opal players.

Recommended Strategy: Pick and Pop, Post Fade, Be gigantic and clog up the paint on defense

Other Comments: Note that he has an unusual selection of plays for a center. He serves as the handler on pick and roll plays and not the screen setter. He also has isolation and guard post up. These plays are more common for PGs like Magic Johnson or Oscar Robertson. However, it allows him to set up others with his excellent passing.

Use if: You want a center who can space the floor and is also effective inside. You want to try PG plays with a center.

Don't use if: You value speed above all else.

Bottom Line: For 150 tokens, he has great value. With a decent coach, he will hit 99 overall easily. In my opinion, he is the best value for tokens in the game. Morris Peterson and Eddie Jones are cheaper and also great values. Gerald Wallace is another great value. However, they will not make the impact that Sabonis can and do not represent anything that unique. It is easy to get 3 and D players from the market. On the other hand, 7'3" space creating centers with HoF dimer are not common.