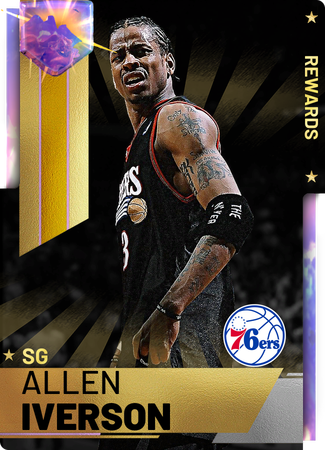 I picked up Iverson as my second token reward because I'm a lifelong Sixers fan, but wasn't expecting to play him much because of his height. Man, was I wrong!

(NOTE: reviewing this after all the cards have been released.)

Finishing: Unlike most small guards in 2k19, Iverson is terrific at finishing over bigger players. He usually does something acrobatic, gets fouled, or does an amazing dunk. Yeah, even over 7 footers.

Playmaking: He consistently gets my 'assist of the game' and rarely turns the ball over. I pair him with GO Magic in the backcourt, and the two trade possessions.

Contested 3s: Because of his height, most shots end up being contested, but he makes them anyway. Great pull up moving shot, too.

Steals: Best in the game. I've had possessions where I knock the ball out of the opposing guard's hands 3-4 times in a row, leading to a shot clock violation.

Rebounding: What you'd expect from a small guard, though he does occasionally grab some over much bigger players.

Shot Contest: Here's where his height is an issue. Be sure to pair him with a bigger player in the backcourt. Great at getting around screens, though.

Triple Threat Online: Great in Unlimited, but not very effective in TTO because of his height.

Use if: You want to have fun. People are so used to cheesers, they won't be able to counter his speed.

Don't use if: You need big players to succeed.

Bottom Line: one of the most fun cards in the game, and much better than folks give him credit for.