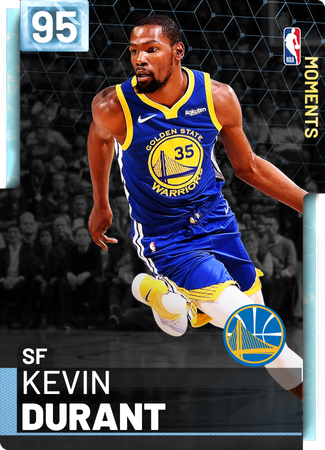 Inside scoring: Great at finishing near the rim but doesn't poster dunk often and misses dunks occasionally otherwise great animations and finisher overall.

Shooting: Lethal shooter, he easily has one of the easiest releases in the game. Not extremely fast but not slow whatsoever. His moving shot is also extremely easy to time. The fluidity of his shot is very appealing to me and most people will probably feel the same. 84 3pt shooting stats don't seem to have a major effect on him making shots.(note I also have diamond Steve Kerr so that boosts his standing 3pter to 89)

Defense: Plays much better than stats indicate because of his size. Gets blocks on even larger cards than I expected. Steals are not his strong suit but he'll get them here and there when timed right, and intercepts passes because of his length. Solid defender overall.

Playmaking: I think this card easily has the some of the best dribble animations in the game hands down. It makes him feel really fast and he can break down defenders with ease. If you know how to use the sticks just break em down and score or kick it out. I usually don't turn it over with him too often and I play him at sg.

Worth it: I'd have to say if you can get him for 120k-150k Mt he's a must cop. I can't imagine how insane the PD KD is gonna be if this diamond one is this insane.

Don't use if: You genuinely hate KD with all your heart lol

its time for u to cop PD KD my friend

have you ever tried kobe ? im between him and black mamba rn and cant decide, im kinda skeptical about this card, and kobe got hof difficult shots

I'm personally a bigger fan of Kobe cards because he bodies people at the rim and has good strength and a post fade. But as far as a standing release goes I'd have to give it to KD