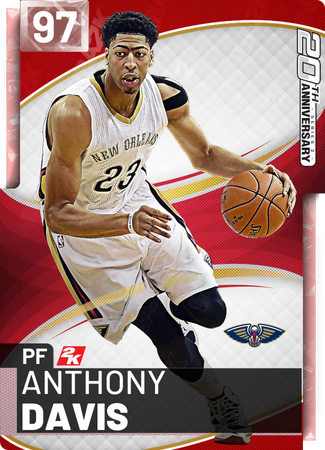 Good morning everybody. This is ReviewsForThePeople and I am finally back to write another review for the 97 overall pink diamond Anthony Davis in NBA 2K19 MyTeam. Now, I try to keep my reviews as professional as possible and I was extremely tempted to make the title "Best Card in NBA 2K19 MyTeam" because that is exactly what Anthony Davis is. Guys, I cannot emphasize it enough that this card, in my opinion, is the best big man in the game and honestly, I think it is more worth it to purchase this card, rather than obtain 750 tokens for galaxy opal Wilt Chamberlain. The only rating that AD was missing was a jumpshot and 2k has finally given him amazing shooting stats and he has HALL OF FAME BADGES. These two aspects alone make AD an unstoppable force in NBA 2K19 MyTeam and like I said, I can't name another big man that is more efficient than this card and I am going to tell you exactly why. As always, my reviews are based on gameplay experience and this gameplay involves MyTeam Unlimited, as well as Triple Threat Online and Domination. I play around 3-5 games in each gameplay category and his statistics are the basis of this review. So, as always, I hope you guys enjoy the review.

Recommended Strategy: I would suggest you put this card in nothing but pick and roll and pick and fade situations. If he's not catching the ball to finish lobs, he is fading for the open three and his jumper is cash. I would also recommend even calling plays to get him open for threes, the same way that you guys run plays to get real sharpshooters open for threes.

Use if: You want an extremely versatile, athletic power forward that can slash with ease and shoot consistently from the perimeter.

Don't use if: You would rather have a pure post scorer at the 4.

Alternative Player: I would suggest picking up the pink diamond Blake Griffin for around 70-80k as an alternative. If you have a bit more MT, I would go for the pink diamond Kyle Kuzma for around 130-150k. Both these cards have very similar playstyles to AD, but they definitely don't match up to him in the slightest.

Bottom Line: Perfect all-around card. Would I suggest spending over 400k on this card? Absolutely not. This amount is way too expensive for any card in this game. I would definitely wait until he has been in the game for a week or two, so that his price drops to hopefully the low 300s. Again, in my opinion, he is the best big man in the game and he is my favorite card as of this very moment in NBA 2K19 MyTeam.

Thank you guys so much for taking the time to read my review on the new 97 overall pink diamond Anthony Davis. I hope this review is informative enough to help you guys make a decision on whether or not to purchase this card. I definitely enjoyed playing with this card and he is staying on my team for a very long time and I hope you guys are fortunate enough to pick this card up and you certainly won't regret it. If you liked this review, please make sure to drop a like and if you want to see more high-quality reviews on the higher-tier players, please make sure to give me a follow. Don't forget to leave constructive criticism on the formatting of the review, if needed, in the comment section below and let me know some good recommendations for cards that I should review in the future. Thank you everybody and have a great rest of your week. This is ReviewsForThePeople and I am signing out.

Oh! I just had an idea. You could put their takeover(s) in the other comments and maybe like a brief description of what they do. Just a thought

That's an amazing idea actually. Thanks for the suggestion. From this point forward, I will have a section called "Available Takeovers" and under the section, I will have a list of coaches with different playstyles and the player's takeover(s) will be listed under those subcategories.

The review is out everybody. I hope you guys enjoy. Again, if you like the review, please drop a like and if you want to see more high-quality reviews, make sure to follow me. Thank you and have a great rest of your day everybody.

Glad to see that our reviews are basically the same. That we agree on his game. You just absolutely dwarfed my review tho sheesh. Great review man.

I'm glad that we have the same thinking process. And nah, cmon your review was great. I didn't dwarf it. My reviews are just really much in-depth and that's why they're so long.

Haha no problem. Like I said, I keep my reviews as professional as possible.

I agree with every thing you said, after this AD dropped in price you have to pick him up. I think he is the best Pink Diamond PF in the game

Unfortunately, I don't think his price will drop anytime soon. He is one of the most expensive cards in the Blake Griffin set.

Well apparently, there are Cover 2 Series super packs in the game for a limited time, so it will give people a chance to pull these expensive pink diamonds again.

That'll make their price go down for sure. If ur looking to buy, u should do so after the packs drop

Damn nice review, I'm not gonna get him because I like my big men and don't wanna pay for him (Now, if i got him for free i would sell it but if i couldnt sell for some reason i would definitely keep

Ya for sure. I personally don't think any card in this game is worth this much. If you feel confident with your big men, it would be best to not switch them up. But, I appreciate the feedback.

A very deep and well written review. You went into detail about what he does well and also well he doesn't do well. You also gave it a speech to top it all well. 10/10 Review, ReviewsForThePeople.

This was extremely helpful, thanks, man.

No problem my guy. Always here to help the community out in any way I can.

Thanks my G. I appreciate the love.

Great review, but in what way is AD superior to Griffin? Honest question, because i own both and i can't see much of a difference, basically Griffin is better on offence and AD on defence. They only thing that sets AD really apart for me, is the HOF difficult shots, the badge feels so nice on Bigmen.

If you noticed, under "Alternative Player", I put Blake Griffin and Kyle Kuzma because they play almost exactly like AD and they are much cheaper. Would I suggest spending 400K MT on AD right now? Absolutely not. I would suggest sticking with Blake and if you can upgrade, pick up the pink diamond Kyle Kuzma right away.

Great question. I have both cards as well and I guess my review comes from personal experience. Blake Griffin has been an offensive liability for me recently because his jumpshot is very slow and easily contested. However, AD's release feels so pure that I have confidence in any shot I shoot with him. I think Blake has better contact dunks than AD, but that's pretty much it. On the defensive side, I find AD to be a much better rim protector and perimeter defender. Blake would get murdered by a card like diamond AK47, while AD could potentially drain him of his energy and always keep a hand up. Not to mention, Blake has a 65 steal, while AD has a 90 steal. Blake also has only an 80 block, while AD has a 97. So, overall, there isn't really a major difference, but AD still is a better overall card.

Thank you for your detailed answer, i have to agree with you completely. I played a few more games and i have a better impression of AD now. He is pretty much better in every way than Griffin, except for contact dunks and alley-oops.

I'm glad. That used to be my problem. I didn't give my players enough of a chance, so I sold them right away if they didn't play well in their first 3 games. It would be best to play enough games to see if they fit into your playstyle, which generally should be 10-15 games and if that player isn't working out to your liking, then he can be auctioned off. Does that make sense?

Makes sense. AD just seemed so similar to Griffin that it was difficult to decide.
I never sell players before i am sure i don't like them, i don't worry too much about losing mt.

Both would be insane, if the duo can be afforded by the user.

I feel that all around, AD wins because he is a much better rim protector, he just feels faster, and he has an easier release to time. I'm aware that Blake has better shooting stats and what seems to be better driving dunk animations, but for me, he has been an offensive liability because despite having amazing shooting stats, his release feels very awkward at times. Plus, AD would have more of a chance guarding someone like diamond AK47 than Blake.

you go too in depth goddamn

Hahahaha, like I said, my reviews are as professional as possible and I make sure to not leave anything out. I truly think this review would help you make a decision, rather than just reading a review that says, "Wow, his shooting and driving is good and he's fast." Come on, that doesn't prove anything.

Hey respect my guy. Great review. Dont listen to these dudes ppl come here for an in depth review. I wanted to check out ad review and 3 of the 5 r a waste of time. Keep doing your thing the community appreciates it

Fax my guy. I don't understand what is the point of telling me my reviews are very long. I said leave constructive criticism in the comment section. Is saying that "your reviews are too long" constructive or even intelligent? Lmao.

I guess some people just wann get straight to the point, even in cases where it might be ineffective. I feel like reviews like yours do what a review is supposed to do in a much better way than, say, simpler review, but maybe that's just me. Your work is definitely appreciated my guy.

I appreciate that we can relate on that. I will keep doing what I do and I appreciate your support towards my reviews. It means a great deal to me my guy.