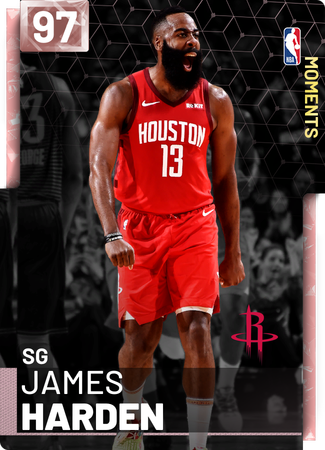 Strengths: Offline used as a point guard, his crossover is deadly and if help defense is not perfect he will get to the line easily. The 98 free throw compared to the 92 on the other hardens are a BIG difference given how often he gets to the line. If used properly he cannot be guarded offline or against offballers

Weaknesses: His jumper has been really hit or miss... Just like the real Harden he will either go crazy or go 1/17 from three...

Recommended Strategy: Put him at the point, iso when bringing it up, then crossover as you get near the defender. If that fails retreat and run a pick and roll around the 3 point line, if they go under or the switch is not quick enough, you can shoot the three or drive.

Use if: You can afford to get him. He is my favorite to run at the point other than Magic Johnson.

Don't use if: You are a budget baller

All three hardens are good, this one just has those extra badges and stats.

Totally agree with the jumper, first game went 2/13 and then in fourth quarter went 5/5. I feel its cause its slower or maybe because half the people got this card for free