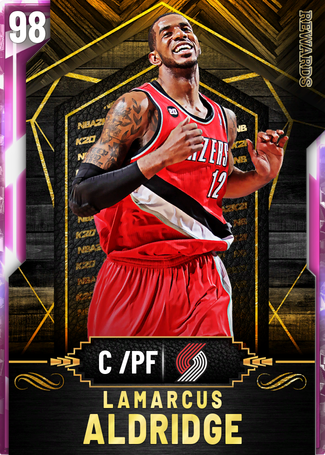 Hey guys, just a heads up. I prob won't be doing a shit ton of reviews like I said, as I am going to he playing (or in reality grinding) Red Dead Online. Just a heads up! Let us continue.

Inside Scoring: He makes contested layups, dunks on people, and is just a tank in the paint. He does not have flashy dunks but have athletic flushes. If you want TT park dunks, you will need a dunk shoe and Stotts to boost his dunk to 87.

Defense: It may seem low, but he gets blocks with ease. He locks up everyone. He has 90 interior and 92 block, along with hof intimidator, rim protector, and other needed badges. only gold clamps tho!

Rebounding: He was grabbing offensive and defensive rebounds with no issues at all! I thought I was using Bol Bol for a sec.

6'11: Not that bad of an issue, but he will get bullied by the extreme tall players like Bol Bol, Muresan, etc.

Recommended Strategy: Use how you would typically use LA

Other comments I did not put dribbling as a weakness or strength since he can speed boost, but also has Clyde Drexler's behind the back move.

Use if: You have the tokens for him.

Don't use if: You have better options.