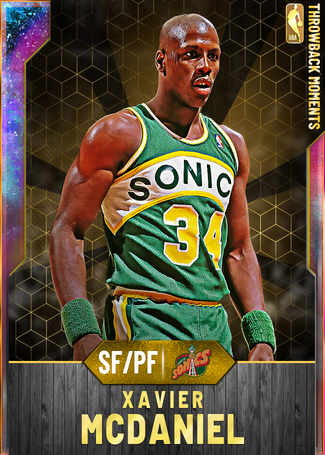 I bought this card because I thought he would be a fantastic cone, and he did not disappoint. Although I wouldn’t use this card as a spot up shooter, I think he might be one of the best athletic, defensive opal rim runners in this game

I use this card as a rim runner and clamp god

Use if: "You want a slashing, shooting, kind of, and clamp god and lengthy tall small forward

Don't use if: you have all the goat cards and have a supper stacked lineup

*Bottom Line: pick him up, he’s sort of cheap, he will go up in value, top tier cone u

Is he better than Thad?

in unlimited yes, in tto no

Okokokok I don’t even use that’d in tto ima pick up Xavier tomorrow.

no. I was thinking of getting him but my SFs are set. he was 49k yesterday

He’s a steal for that much

ok, idk where to put him tho

Yeh ur team is stacked

W8 why is rebounding a weakness at the 3 he has pretty good rebounding.

no this dude sucks cant even average 1ppg