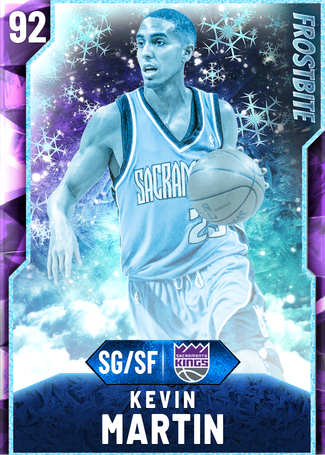 Hello everyone today I will be doing a review on frostbite Kevin Martin and I’m sure as you could tell by the rating and title this card is amazing to say the least And for the record I don’t even have him at diamond yet he’s still at amethyst for me.

Defense- he’s 6”7 so it helps 84 lat I gave him a shoe to go up to 87 it also goes up with the evo his length allows him to hang with anyone really and has good switching ability.

speed- he has 81 speed with 81 acceleration so not the fastest guy but this also goes up with the evolution.

No clamps but gets them in the evo

Just a side note badges he gets when you evo him- GOLD clamps,pick pocket, interceptor, pick dodger, trapper, tireless defender, offball pest

He's amazing, I got him out of a pack and I can't count how many times I green with him in a match. I would pass to him from PD Stockton and drill shots from anywhere between the logo and the basket :D His release is sugar. Still working on the evo tho