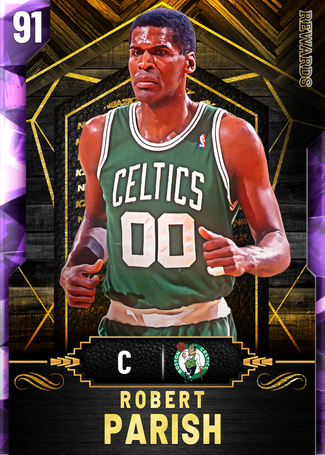 The title of this review could apply in a few ways. Parish in real life was always the unsung hero of the '86 Celtics, and his production was, while valued, never given its fair share of attention. Now in 2K20, he remains a low-key player, as 9/10 teams will just run that Sapphire Gheorge Muresan (I love/hate playing against him). That being said, this Robert Parish is a great fit in myteam, and here's why.

Bought for: 30 tokens (I completed regular domination and grinded a bunch of the evo cards in triple threat offline)

Recommended Strategy: This card should not leave the low block. Fades, hooks, lays, dunks should be the majority of your shot selection if not all of it. If you're going to make pick plays, 90% of the time you're gonna roll. Only use the fade if your opponent is cheesing with a 7'7 no skill giant and staying in the paint. He has an easy enough release where you can't just leave him the mid range (close shot is way better if you can get one). Same goes on defense. Don't have him leave the paint or people will drive right in.

Other Comments: See how he fits into my lineup by clicking the following link if you'd like https://2kmtcentral.com/20//lineups/12503/my-2k20-unlimited-team

Use if: You want a dominant presence in the paint on both sides of the floor

Don't use if: You enjoy doing nothing with your big (a la Gheorge Muresan), or prefer a stretch big

Bottom Line: One of the better amethyst token rewards, and definitely one of the best amethyst bigs. An excellent addition to any team, and an even better one if most of your team can shoot (4-out 1-in is a great freelance set to run with him). If you don't know who to buy with your tokens, Robert Parish is a great buy.