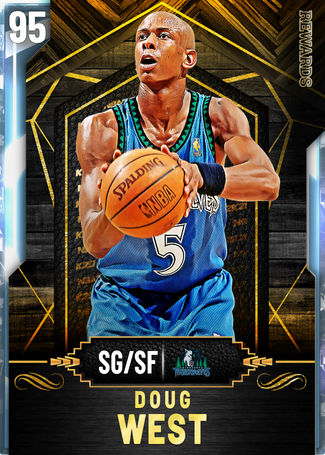 This dude is crazy good. He is excellent if your lucky to get him. He is only in the vault for about 20 days. I was fortunate enough to get him. He is best used at the two but also is good at the small forward. I use him in triple threat online and myteam unlimited. I love using him in wing isolation plays. Because it is an early stage of the game not many players are as good as him. If he gets a switch to a gaurd then you can blow by with his strength and quick first step. If you get switched to a big I drive then snatch back and shoot the mid. When on his own position you can drive off the pick or in general. Also his release is cash so don't be afraid to pull the three he has gold quick draw. In triple threat he is good at everything. On the break he will catch posters. Also that three is good so you can pull the three. Just make sure that your open because he won't hit 40 percent covered over 65 percent. I do green 60 percent of the shots I take though. Overall he can dunk extremely well, shoot good in the mid and defense he is great at. Gets a ton of steals.

Bought for: you have to get him from the vault on triple threat offline.

Strengths: Defense, he steals a ton and blocks.

Driving, he is insane at getting to the basket. He finishes in contact and gets crazy dunks.(that double in between the legs)

Shooting mid, he makes nearly every mid. Moving contested, what ever he will make inside the three point line. He also has gold green machine so once you get one green(very easy) you will green your next shots unless your a bum.

Dribbling. He has 86 ball controll so he can speed boost. Once you speed boost you can throw down a dunk.

Shooting, He only has 79 shot three so he isn't Steph curry but he can hit open and if you master his release you can hit moving threes. He does have green machine so once you get one green it's hard to not get another.

Height, he is only a 6 foot 6 player. Won't be at a disadvantage at sg but a small forward look out for players like james Posey with the post fade. He will clamp cards like the Greek freak tho because of his elite defensive stats. James Posey is a bit taller though(like a 4 inch advantage) so he can hit the fade on him.

Mid range pull up. He has 95 shot mid so once he is within the three point line he is a walking bucket.

Use if I dont see why you won't use him, he is so glitchy. The difficulty is getting him. He will be relevant all year. He is sooo good.

Bottom Line: He is just a great player. He can drive, shoot mid, and a bit of threes he can hit. If you get him he is goated the hard part is getting him. The rest is a peice of cake????

Ahh, beat me to it. I love this card