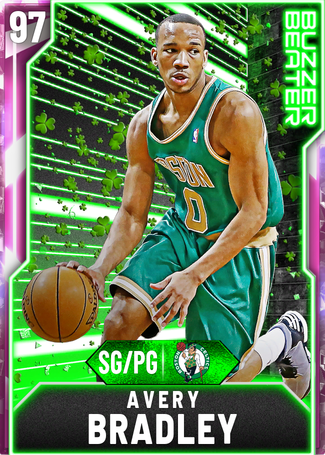 I mean... 20k for a PD is not bad, at all. Had this come out last month I'd say this is beastly but I got Walt Frazier and PD CP3. Oh and don't forget Chauncey cause he's better than this card. This just feels lackluster considering the end game level cards we have out. Westbrook, Rose Payton and Magic. Oh I guess LeBron, Simmons and Giannis too cause 2K is greedy and evil since they decided to use their position lock to make certain cards even MORE valuable since you need those specific cards to guard them. Anyways, there's just way better options out there. Let's just focus on Walt since they're similar. We could compare him to Payton but he's going for a ton of MT for some reason so we're comparing the budget cards.

Recommended Strategy: 3pt plays. ISO might work against bad defenders but you want to use his catch n shoot mainly. You can put him on smaller PGs who like to shoot and he'll shut them down at the 3pt line. But really the options here are limited.

Use if: You'd like a 20k PD to be your budget PG. But be warned you get what you pay for.

Don't use if: You literally have almost any other PD PG that has been released within the last month (unless it's a series 2.0 current cause those suck). Or you find a Walt Frazier out there cause he's still cheap I think. I have no idea why, cause Walt is amazing.

Bottom Line: Still 20k for a PD is not bad. I think this will be a fine choice for budget lineups but like I said there are better cards out there. And some might still fit your budget. The thing with this card though it's painfully average. He's Averagery Bradly. Shooting is average, his inside game is average, his playmaking is average, his speed is average. His defense is great but that's really the only wow factor about this. CP3 entertains me every time he throws lobs, or dunks cause I'm not used to seeing that, and he's a dribble god who can break off defenders and green shots all day. Walt's two hand side clutch tomahawk whatever that thing is called dunk looks so pretty every time I see it, he blocks other PGs and smothers guys you wouldn't think he'd be able to smother. Bradly is just... he's Bradly. He's ight.

If i use him as a 3 and D point guard, because I have GO Brandon Roy, GO James Worthy and Spotlight Giannis who I will mostly have being the ball handler, would he be good? It seems like thats where he will excel. I've noticed that my PG has really been delegated to spot up shooting and defense, so would he be the best at that?

If you're running some plays for him once in a while and just use him as 3 and D PG to pop shots off when he's open yeah he'd be fine.

I still don't understand why 2k gave us a 97 Avery Bradley.

I assume it's because he hit that big buzzer beater during Game 3 Celtics vs Cavs. Why a 97 though I have no idea.