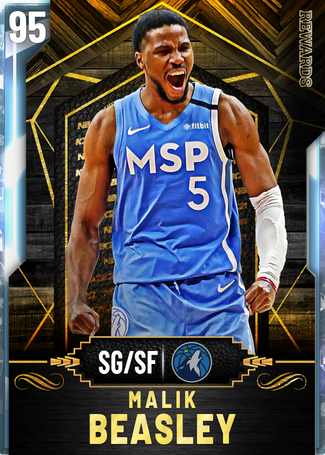 Bought for: (players to finish challenges were only like 7-8k)

Outside Scoring: This man has a nice fast release (similar to Gerald Wallace) and barely misses off catch and shoot. He's got all the shooting badges you want and can shoot from anywhere on the court. Pair him with a point guard with Dimer (I have PD Nash) and you'll be raining. And God forbid you to start his HOF green machine.

Finishing: This card catches bodies in the paint. He's explosive to the point he can blow by most SG's and his speed paired with his HOF finishing badges makes him an amazing finisher off isos and pick and roll.

Shot Creating: As i said, he is fast and once you get past your defender, you can hit them with a smooth step back or fade from anywhere (helped by his HOF space creator and difficult shots) and it's cash. Pretty hard to guard if you get used to his releases.

Rebounding: I know its petty for a SG, but look at someone like Lance, and you get outboarded quite a bit.

Use if: "You want an allround athletic shooting guard that can shoot the lights out"

Don't use if: "You need a card that can clamp down Opals"

Bottom Line: If you have the time, he should be on your top list of players to grind for.