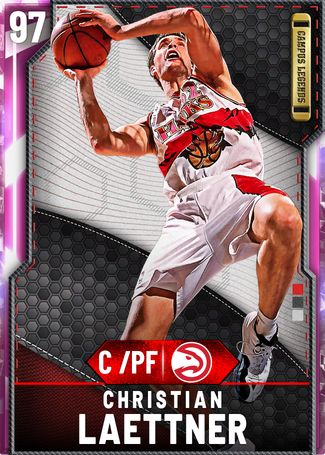 Recommended Strategy: Pick n pop all day. HOF deadeye means they cannot focus too much on your guard cause Chris will absolutely light them up for it. 3pt plays designed for pick n options have good outcomes. Where your center sets screens for someone at the 3pt line for them to run the defender off them and force a switch up sometimes will leave your big completely open as they try to chase who ever he set the screen for. High picks are fun too cause if they sag off from deep he can easily hit those over them. PF 3pt plays also work if you find a playbook with some good ones. Oh and post plays are great too. I played him at PF and it worked against certain guys but his speed is good for a center so really it depends.

Other Comments: Coaches... so Balanced does give him higher offensive rebounding which is great. I would say balanced if you're running him at center. Mike Malone if he's your PF to give him that speed and perimeter D boost. Shoes is up to you but I gave him a Air Jordan IX Low for 3pt and block. You'll have a center with 99 3pt rating.

Use if: You want a big sniper who can also body people in the post. An all around offensive beast.

Don't use if: You want a taller pure rim protecting big.

Bottom Line: He's not bad on defense, can hit 3's like guard and solid rebounding. The offense this provides is instant value. Which for his price is more than worth it. I have a lot of fun using this guy.

Thank you so much, I'm definitely going to pick this card up!

He's definitely worth it, usually stretch bigs are expensive as hell on the auction house but he's dirt cheap for some reason.

No way man you already have 3 reviews of my starters! Seems that we have pretty similar lineups!