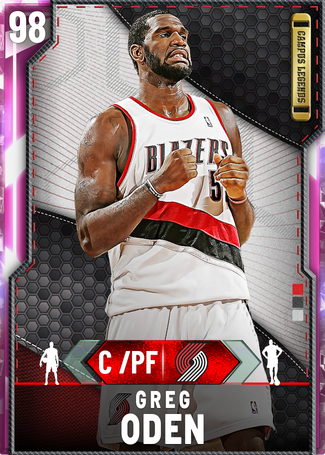 GO Howard, but a Lite version

This card is insane! For 60k MT it comes really close to what a GO Howard can give you, but without having to collect a bunch of cards with a price of about 1 Million MT. Well, it is a really well rounded center with a WET release which is really EZ to green, making 3s pretty easy to make.

Scoring: Damn this card is dominant. Post fades, layups, dunks, mid-range jumpers and even 3s can be made with Oden because of his great jumpshot (much better than the average center). He has an insane post and paint game because of his footwork and his strength, making him really dominant near the paint.

Defense: Duuude, HOF clamps is really a thing! Amazing defender near the rim and he is also pretty quick so he can also switch sometimes to a guard in the perimeter. He is super versatile in the defensive end.

Rebounding: This guy is huge in game, so boxouts are not a problem. In the offensive glass he can catch boards because of his impressive jumping, and he is a master in putbacks with Shaq-like animations.

Athleticism: This guy is big, but also really fast for his size, so in fast brakes, alley-oops are really EZ to do and it is really impressive seeing him running up the court, he looks super fast for his body.

Playmaking: Well, he is not a point guard, but he can get a bunch of assists base of playing in the high post and watching for the open man in the perimeter.

Overall, he is a BEAST and he can fit in almost every offensive strategy while deffensively he is really like a Dwight Howard type of defender.

The reason 2k keeps giving Greg Oden great cards is beyond me.

But I think 2k is creating a big what if with some cards of this new set, making cards of what Greg Oden could have been without the career ending injuries.

Yes, but every year he gets a couple good cards. I still don't know why.

True, but we will get benefit of it.

Yeah. And hey, I'm not complaining.