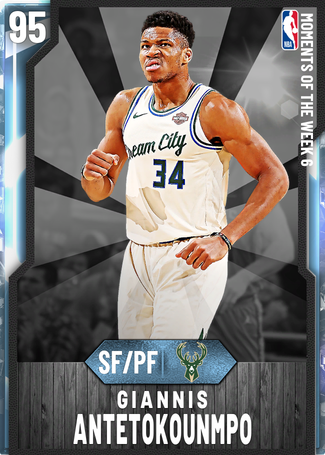 My Lord and Saviour

This card has been running in every lineup possible, there is no possible way I could leave this card out. I tend to play him at the 4 due to his height and incredible shot-blocking abilities and I run the floor with him every time I catch a rebound. Most of the time he will finish at an open rim due to his speed, and even posterise defenders who think they have a chance of stopping him.

Recommended Strategy: Drive into isolations against weaker defenders, post up against smaller defenders, take wide open threes if the pass is by someone with dimer.

Use if: You want a two-way demigod with great versatility and length.

Bottom Line: No other Giannis is a buy now apart from his series 2 card, which I do not see as worth the price. I have had this card for a few weeks and you'd be hard-pressed to find a better two way player than this, even for 50k MT.