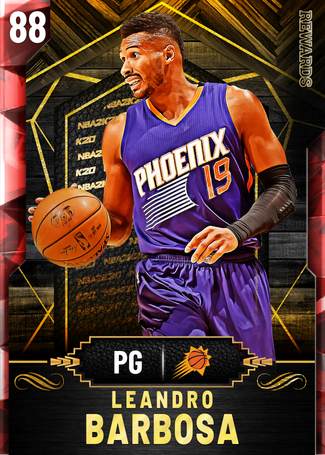 Ok guys I know it’a been a bit but I finally found time to write you scrubs another review. Now when I saw this guy’s stats I thought I was bouta nut real quick cuz his speed and shooting is beyond comparison of what’s out stat wise right now. And he’s not a midget, being 6’2”. I mainly compared this guy to my ruby Darrell Armstrong, you can go see my review on him. This guy more resembles ruby Charlie ward but is a better version of ruby Charlie ward.

-Dribbling: I personally love his dribbling. I haven’t gotten ripped yet and all I do is abuse his speed with ball by running by defenders and giving them a middle finger up their ass while I go score a cheesy layup.

Other Comments: He’s just a beast. He has a couple of drawbacks in his game but on the offensive end he’s a beast. He’s gonna be my backup to Darrell Armstrong because Darrell is just Darrell man.

Recommended Strategy: Give him the ball. Run around a defender. Run to the hoop. Score.

Use If: You need a guy that blows by anyone with ease and gets buckets at the rim.

Don’t Use If: You want 5 defenders.

Bottom Line: He’s a very fun card but there are better ones. Comparing him to ruby Charlie Ward, he’s better offensively but a lot worse defensively. I would choose Barbosa over Ward, but Armstrong is my little baby boy and it’ll take a lot for me NOT to start him.