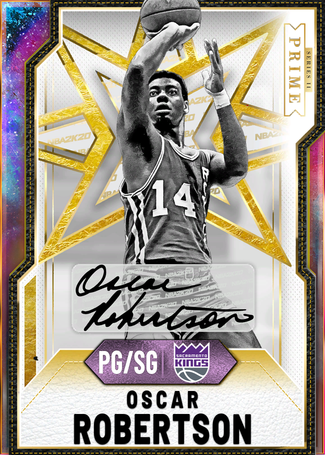 Gave me the big Orgasm

This card is amazing and feels great. He literally has not missed a single shot for me in the 5 TTO games I played with him. You may think Ben or Giannis is better, but if you know how to use this card, then he is better than those 2. I thought Josh Smith was the best card in the game(besides AD who I don't have), but this card has quickly grown on me.

Recommended Strategy: Post fades, Pick and roll, driving and isolation, spot up shoots and everything else. He excels at everything on offense.

Other Comments: I reached maximum orgasm when using him.

Use if: If you want an amazing all around player that you don't have to feel cheesy for using.

Don't use if: You want a super tall point guard who is less fun to use.

Bottom Line: REALLY costly obviously, but he is worth it for sure. And to also get KG? Hell yes. I don't even like KG as much as Oscar though.

I was caught off guard by the title...