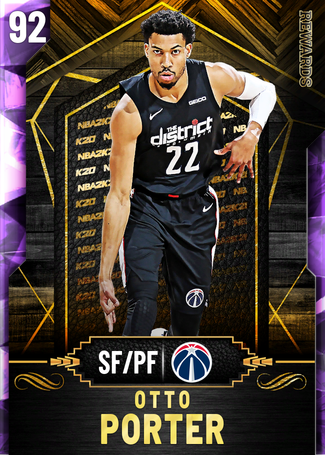 This card is absolutely ridiculous no cap. First off, he only costs 30 tokens on the reward market! Second, his 3 pointer is like 95, and to cap it off, he has HALL OF FAME Range Extender (formerly known as limitless range), as well as like every other shooting badge at HOF! My man Otto can also dunk and finish at the rim quite well too. His release is so smooth and the end is super easy to green light. On defence, he's not great tbh. Don't get me wrong, he's not like a defensive liability, but don't get him if you're expecting him to get like 2 blocks and 2 steals a game. He can still hold his own on defence, but whatever he lets up on defence, he makes up for twice fold on offence. In triple threat, you can literally score 21 points with him soooo easily. Finally, he isnt a BS card, in other words if he's open for 3 he makes it automatically.

Bought for: 30 tokens on token market

Recommended Strategy: Run 3pt plays for him, pick and roll with him as ball handler, and just pull it from deep. If your opponent runs a zone, its game over. Put him in the corner and its an easy 20+ points

Use if: "You want an absolute lights out shooter who can finish"

Don't use if: "You need a defensive monster like ben simmons"