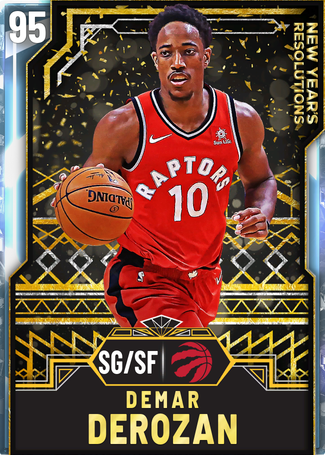 Bought for: 45k for the Pink Diamond

Inside Scoring: Do I really need to explain? This mf can dunk on anyone and WILL. He is damn near unstoppable in transition and driving in lanes. Even if you don't finish, he has 98 draw foul and his free throw is automatic. God tier finisher with the HOF badges you need.

Outside Scoring: He has an amazing release and has a 93 3. ON A DEMAR CARD. He's a budget T-Mac and can outshine even the greatest shooters. Once PD, he gets Gold Range extender which is seriously just game over. You can't call 3pt plays for him, but off an iso, he can really light it up from deep.

Shot Creating: It's DeRozan. He can fade, pull-up, and hit spin jumpers from damn near anywhere and his releases are easy to time. HOF Difficult and Green Machine make him unstoppable once he gets going.

Defense: I can't believe I'm saying this, but they juiced him on D. He has 12 defensive badges and a 90 perimeter D. He's a 6'7 SG and can lock down anyone on the other team, even speedy PG's. He gets many more steals than you'd expect and holds his own on isos.

None: He can do everything. (except beat LeBron in the playoffs.)

Recommended Strategy: "There's no strategy, go out there and get buckets."

Use if: "You want a hidden Opal SG that can do it all"