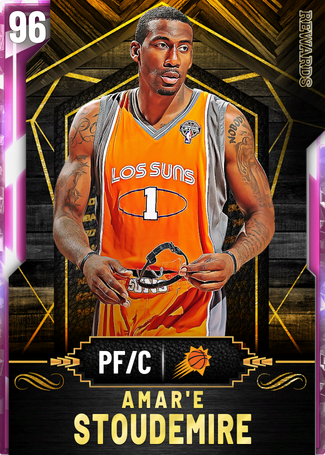 Last year in NBA 2K19, I loved using the Pink Diamond Throwback Elite version of Amar'e Stoudemire so I was pretty excited to see him as the new 12-0 reward card for October. In this review, I will cover if it is worth it to sweat through 12 straight games to receive this card instead of grinding for or just purchasing one of the many other stretch bigs in NBA 2K20.

Outside Scoring (89): Amar'e's shooting won't blow you away but he is still a very solid shooter. His release is very quick and easy to time especially with Quick Draw and Green Machine both being gold. He's very consistent from mid range with a 94 shot mid. I've heard that some people aren't impressed with his three pointer due to it only being an 81 shot 3pt but personally I've had no problems with him from beyond the arc. He has two hotspots in both corners of the three which make him pretty much automatic there due to him having gold Catch & Shoot and Hot Zone Hunter. Amar'e's freethrow release is pretty easy to time as well, his freethrow rating is a 77 so you shouldn't have to sub him out in close games like other bigs. He's definitely not a player that you should be searching for if you're let's say down by three but he's still a reliable shooter if he's left open.

Athleticsm (85): Amar'e's athleticism is the most impressive part about this card in my personal opinion. He is extremely quick for a big man with 85 speed and 74 acceleration. There are many times in games where I'm able to just spam the cut button for free points due to just how much quicker Amar'e is compared to the other team's big. Amar'e's strength rating of an 85 could be a bit of an issue depending on the matchup you face so you will have to be careful with that. He also has a vertical rating of a 95 and a hustle of a 85 which helps him with getting chase downs and rebounds. Lastly, he has a 90 stamina which is pretty solid for any player.

Inside Scoring (93): During Amar'e's tenure with Phoenix he had a reputation of being a ferocious inside player and that is no different with this card. He's pretty solid at getting to the basket with his 84 driving layup and also solid at getting to the line with his 89 draw foul. His 95 standing dunk and 96 driving dunk make this card very fun to use on fastbreaks or during pick and rolls in combination with his gold Pick & Roller badge. These ratings plus his numerous amount of finishing badges (gold Consistent Finisher, gold Contact Finisher, gold Dropstepper, and silver Relentless Finisher) make this card almost impossible to stop when he's driving to the basket. I know some players don't like to play in the post often but personally I like to slow down the game sometimes when I'm in a scoring slump. Amar'e's 90 post hook and 92 post fade in combination with gold Deep Hooks, Deep Fades, and Post Spin Technician make him a very solid option for me when I'm in one of those slumps.

Playmaking (46): I won't dive too deep into Amar'e's non-existent playmaking ratings but pretty much don't allow Amar'e to handle the ball much and you'll be just fine. He also has gold Break Starter which is a pretty iffy badge in my personal opinion.

Defending (81): I replaced Amethyst Cliff Robinson with this card and the defensive drop off is definitely noticeable. Amar'e isn't a bad defender he's just not switchable, 44 perimeter defense and 59 lateral quickness make him a pretty huge liability in mismatch situations. Other than mismatches, Amar'e is a pretty decent defender with all his other ratings spanning between low to high 80s. The only defensive badges that Amar'e comes with are hall of fame pogo stick and gold chase down artist which are decent not great badges in my personal opinion.

Rebounding (93): Amar'e is a pretty good rebounder at this stage in the game. He has rebounding ratings of 92 offensive and 94 defensive. He also has gold Box and Worm which definitely help with rebounding. Just from the games that I've played with him there haven't been many times that he's gotten out-rebounded.

I honestly really enjoy using this Amar'e Stoudemire card. He's been such a blast to play with in all of the modes in MyTeam but I wouldn't say that he's 100% worth going out of your way for. The card isn't perfect and definitely has some flaws here and there when it comes to his defensive stats/badges and his rebounding badges. I don't see Amar'e aging well due to these flaws in the coming months either but for now he's definitely one of the best bigs in the game.

I think Stoudemire's defense is better than you advertise. Anytime I see the diamond Giannis card in someone's starting lineup I switch out Tim Duncan for Amar'e and he holds Giannis in check. Great review and I agree on the ability to knock down from the corners, I eat with him when my opponent is in a zone.

That's fair to say. I probably could've wrote it a bit better.