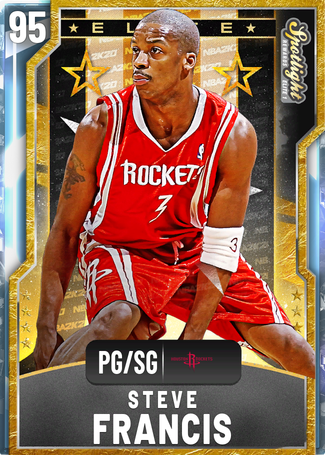 Well Worth the Grind

The Spotlight Challenges are a lot, I know. It asks you to spend a lot of money, and a lot of time for a card that most likely won’t be relevant after a good month. Steve Francis, however, is not like that. Here’s why this card is worth the effort

Recommended Strategy: In this game of blow-by’s, the best thing to do is run the iso and drive. At the rim he’s so difficult to stop. If you have a good defender on you, you’re gonna need a screen. He’s a great shooter, so he can get a good shot really from anywhere. Moving shots are also good ones, so be sure to take plenty of those. If you get bullied by the opposing PG when they have the ball, switch your matchup to a better defender, and have Francis guard the guy your opponent is going to the least.

Other Comments: The grind is also worth it because you don’t really lose any money if you sell back all the players required to do the challenges. You might actually make a little on account of the challenges providing a decent little bit of MT when it’s all said and done

Use if: You want a ball-dominant athletic scoring threat with a perfectly good shot

Don’t use if: You’re not trying to grind or you prefer defensive minded point guard

Bottom Line: I’m so glad I did the challenges for this card, as he’s scary on offense, a wonderful playmaker, and he’s just a lot of fun to play with. If you want a new point guard to have fun with/lead your offense, Francis is definitely worth your time.

can you give any advise on how to beat the challenges

Sure. Which ones in particular?