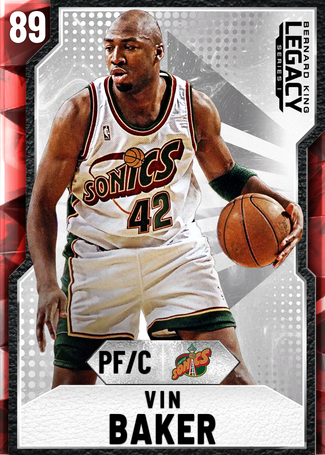 I'm really confused cause his stats don't look too impressive but his total attribute count makes him one of the best ruby cards? I mean he's solid for his price. He's dirt cheap on the auction house but what are you getting exactly? His rebounding is okay but if you want a rebounding PF Otis Thorpe, Dave Debusschere or Truck will be just as good but they're all good at other things too. Actually here... lets do this.

Recommended Strategy: Don't buy... this is like creating a Prospect build in MyCareer, it sounds like an interesting build with just having 70's in every category but you'll just end up being mediocre at everything. Sure his attribute totals sound amazing but that's cause he's so average at everything. Technically he doesn't have a weakness but he doesn't have strengths either.

Other Comments: Vin Baker was a good player. I'm not knocking him, averaged solid numbers was a 4 time all-star and I think he was in the race for MVP one year? But Vin Baker 2.0 came out and kind of took his spotlight, that's KG if you didn't get that. But I feel like he does deserve a better card. This is just bland.

Use if: He is cheap so I guess if you need a bench player

Don't use if: You can have Shareef's Ruby, Dave (although I run him at SF) or... I feel gross saying this but Luke Walton is better pick up. I even think Spicy P or Blake's base cards would be better. Hell get Dirk grind him to Ruby and bam you got a post scoring tall big that's free and eventually turns into a beastly diamond.

Bottom Line: Don't be fooled by that stat total

I actually like his defense. Dude gets lots of blocks for me

He does get blocks but if it's defense you're looking for in a ruby Bobby Jones is all you need. He's a defensive monster. I would say Dave but I run him at SF mostly. Then there's Dennis Rodman's amethyst if you're not trying to spend MT. Not a bad bench pick up but other cards do whatever job you need better for the same price.