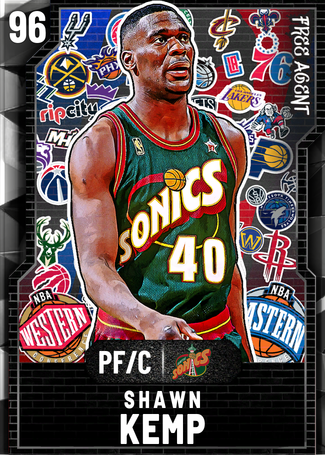 What's up guys, I'm here reviewing Shawn Kemp, specifically the 96 Overall free agent card. This is the first review I've ever written so if you have any tips on writing these I would greatly appreciate it. Anyway, let's get into this one. I spent a lot of MT for this guy, and he did not disappoint at all. In a pick a roll he is insane, an excellent finisher. He was worth every penny I spent on him.

Strengths: Inside scoring is amazing and in my experience he'll dunk on anyone and everything. He's a stud down low in the post. His defense is good, and he gets a lot of blocks. I like he's ability to guard the perimeter and honestly I wasn't expecting that. His three pointer is pretty darn good. It took me a while to get his stroke down but once I did he was pretty much cheese for me.

Weaknesses: He doesn't have too many weaknesses in my experience, but if I had to say one thing it was that he turned the ball over way too much. Honestly, it's the whole reason that he's not a five star for me. It's kind of ridiculous. It's almost like you can't pass the ball with him. One of his biggest strengths is also one of his weaknesses if you want to call it that. When I say it took me a while, I mean it took me a WHILE. It was a really hard to get it down. But like I said before, it was worth it.

Recommended Strategy: If you want to work on that three pointer, be my guest. Once I had it down it really worked for me. He can stretch the floor then if you're interested in that. My general strategy was too use him in the pick and roll or eventually pick and pop. He sets great screens that can set himself or someone else up for a big play. Alley oops are the big thing that I generally run off of these picks. I like to run him at the power forward actually, and use my Domontas Sabonis at the five. I like him more at the four simply because there are more stretch fours then stretch fives so he can play on the perimeter, which is a great area for him to shine. He's great at both though.

Other Comments: Overall he's a great player. He's incredible at dunking and catching lobs. He has good defense and is a steal machine.

Use if: You want a great post scorer who can shoot decently or run pick and rolls all day long.

Don't use if: You want a play maker.

Bottom line: Great player for a decent value. He has a few flaws here and there but is overall really good. He's honestly one of those guys that I can use and not even notice he has twenty and ten at the end of the night. Try to develop the three if you want complete cheese.

By the way here's a link to my YouTube channel! I'd really appreciate it if you'd check it out! https://www.youtube.com/channel/UCH5JoxQ6_BOLMzZof5WbGDw?view_as=subscriber