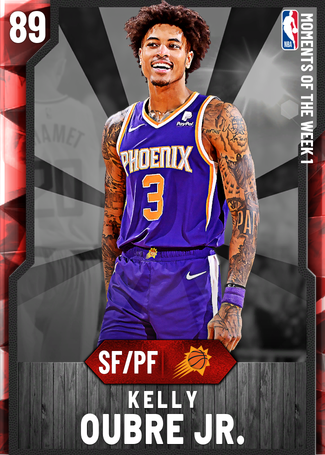 Feels like and plays like an amethyst to be honest. I really like picking up balanced players. Guys who can do a little bit of everything and Kelly fits that bill. He's weird on paper. 68 inside and 72 defense? Despite having 87 block, 86 steal 82 perimeter D. 93 driving layup, 85 driving dunk with 88 draw foul. All those stats look decent. Actually his interior D is at 69 which is higher than my Amethyst Scottie Pippen! Well the reason his stats seem mediocre is because his tendencies are out of whack. Block shot tend is 20... despite having an 87 block? Crash tend is 25 despite having decent rebounding stats. So this card is great if you're constantly controlling him. My Scottie Pippen does all the steals and rebounds even blocks I could ask for without me controlling him all the time so I don't have to off-ball and control Scottie, I can focus on the on-ball defense and Scottie will just come over to help on his own. Kelly doesn't do that. BUT I'm starting him over Scottie most the time cause Kelly's offensive is lethal.

Recommended Strategy: He's not a LeBron or Giannis. You aren't going bully cards with this dude. But this is a perfect card to run plays with. Get a mismatch on him or give him some off-ball screens to get him open and abuse that catch in shoot. 3pt, mid range, driving, shot close don't matter where it is if the defense leaves him open anywhere or gives him an open lane he's going to get you that bucket. On a Balanced or Pace n Space system with a lot of screen plays this card really shines on that system.

Other Comments: Obviously a Ruby lineup he's amazing but if you're rocking some of the higher tier cards and need a cheap Ruby option to come off the bench for some scoring and defense Kelly is a great pick up.

Use if: You want an all-around offensive threat on your team who won't be a defensive liability. Like that amethyst Rudy Gay card, that just lets everyone score on him.

Don't use if: You want a dominate big SF

Bottom Line: For Ruby this card is impressive.

Nice review, I like this card too. Would you mind if give me suggestion for my lineup? I dont have much MT and I like players who can contribute both on offensive and defensive end. https://2kmtcentral.com/20/lineups/44880/needsuggestions

What evolution is Raef? Cause it's not a bad lineup, but I'd recommend some defense. Amethyst Jerry Sloan is cheap on the AH and is a lockdown 3 and D player that guard almost 3 positions.

I've just evo'd him once, still working on the 2nd evo now. Also who do you think I should swap out for Sloan?

Shai is good defender so I would have Sloan on the bench and you can switch them out depending on which one you need more. And if you're looking for a center with a 3pt shot Bill Laimbeer is a sniper with decent post defense.

averaged about 25 8 3 3 3 with this card running him at sf/pf, hes an absolute beast. nasty dunks and barely gets blocked and his 3 ball was mental some games, every second game i would shoot like 5/6 from 3

Cool, actually I would prefer C that can play defense and post game or mid range with decent rebounding, any suggestion on that?

There's not many good centers for cheap. Reeves really is the best cheap option. Ruby Tyson is a monster on defense and rebounding but no mid range. Antonio Davis and Alvan are too short. If you have amy token rewards Robert Parish is a solid choice, good mid range and defense. Bill Russel and DeAndre Jordan though are the best rim protectors with good post scoring.

Alright, thanks for all the suggestions and explanation, it really helps me alot. Hope to see your next review soon !

I did not see the new drop, David Robinson is going for 20k on AH. Get it while you can it's a beastly center.

Thanks for the advice, I play on PC and manage to get him at low price.