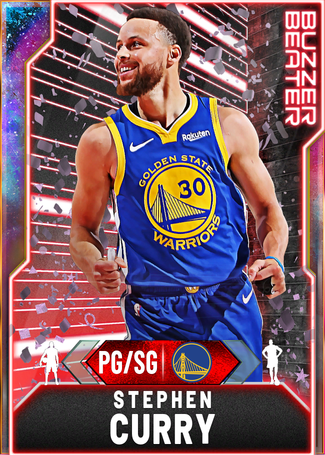 I run him at SG and he's great

I use Steve Nash to run my offense because of his passing skills, but when I replaced Nash with Curry... my team suffered big time. Curry was shooting bricks on my team, but when I took him off the ball and put him at the 2, Nash can get him the ball for catch and shoot, now he's deadly. But he's still small for the SG spot.

There's only one diamond Underarmor shoe they made (thanks 2K), and it's a 3 point shoe. So Curry is now a member of the Jordan Brand, I added a passing shoe and although he is rated 99 passing, he's still not a better passer than pink diamond Steve Nash.

Recommended Strategy: "Drive 1v1, catch and shoot, mid range pull-up, on-ball defense, or play him in the 2-3 zone for some quick steals and fast breaks

Use if: You want Chef Curry running your team and you need a good 3 point threat at PG or SG.

Don't use if: You want a great play making guard. Steve Nash is a better passer and faster for cheap.

Bottom Line: He's worth 150K but nothing more (try to get him with a diamond contract), He's perfect for cheesers who use a 3 point coach and playbook.

I sold him already. lol

god I wish I would come up against someone with Nash and Curry. Barbecue Chicken.

who do you have in your backcourt?

that's what you think. I beat a ton of "god squads". People need a bunch of Galaxy Opals to play the game. Not me.

I'm sure if you're good enough with it you can win with it but it'd just be refreshing aftercoming up against Ben Simmons and Magic over and over. I run Draymond and MJ at the 1 and 2

I have to bulk up my back court. I just opened J.R. Smith in a one fan fav pack!! Now I have a new back court. I'm gonna miss Steve Nash!