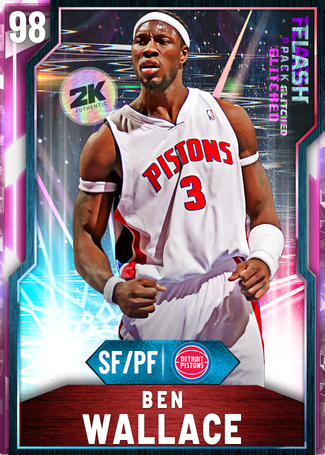 Here's the deal about the Ben Wallace card: no amount of deodorant will spare you from the immense sweat that this card brings. Off-ball cheesers rejoice; this card should be your first purchase. The headband, the afro, this card if tuff. Enough BDE to make yourself feel good about whatever you're packing behind the zipper.

--ANIMATIONS: This is the most important aspect of why this card is $$$. His crossover animation and quick stop are incredibly and glitchy. I really enjoy a lot of the players in the glitched set and I think these cards hold value well because of the way 2k coded their animations. Try this card out and you'll see for yourself. It's such a pleasure crossing up my opponent off of a P&R and having Ben Wallace pull up from 25 in his grill. Steezy.

Other Comments: (optional) I would recommend running a shoe like the AJ3 with this card to boost the driving dunk to 88, trust me, you'll be able to tell the difference.

Use if: You're the type of person who isn't afraid to engage in hand to hand combat.

Don't use if: You're the type of person who would legally rename themselves 'Metta'

Bottom Line: Ben Wallace is an undervalued cheeky 3 and D demigod; especially true if you like to play TTO.

Currently running with hedo, vince, ak47, bosh and yao in the first 5. Big Ben coming off the bench at the 3