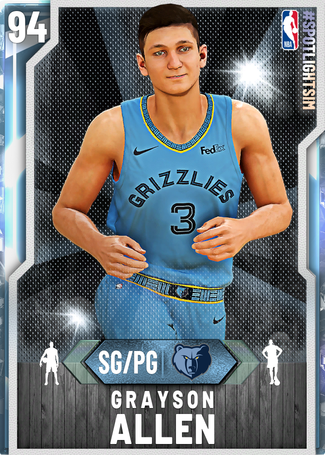 So before I review Grayson, I must mention how I use him. I DO NOT use him as a star player. For me, he wasn't averaging 20 points per game. It was more like 10 points, 4 boards, and 5 assists, ans potentially 1 steal. That's why I referred to him as a Swiss army knife. Also, I used a +3 mid range shot for him. I also have +4 to three pointer, mid range, dunk, ball control, and perimeter defense (Yeah I have Stotts) which I'll be basing the card off of.

Slashing: 92 driving layup and 94 driving dunk is pretty high for this card. He does catch bodies as well. He has some decent dunk animations. No windmills, 360 dunks, or reverse clutches, but he has tomahawk dunks.

Shooting: Despite his zones, he's got pretty good shooting. For me, he had 97 mid range and 95 three pointer, with a pretty quick release.

Defense: For me, GA was amazing defensively. He only had 94 perimeter defense, but it seemed higher, since a lot of players who have that rating tend to get schooled.

Height: He's 6'5 and can play point guard, enough said. This helps if someone has a player like James Harden at PG.

Playmaking: I add this in all together as handles and passing. He's got pretty easy to break you handles. He can pass well too.

The fact that you can't trip people.

He can be very inconsistent with shooting. Some games you'll go 1 for 6 and some you'll go 4 for 5. This isn't a weakness if you are able to green his release well.

Recommended Strategy: Use him as you would anyone else.

Other Comments: Pretty certain I made it obvious, but I used him primarily at PG.

Use if: You want an all around or 'Swiss Army Knife' guard.

Don't use if: You want to use him as a go to scorer.

Thank you. Kinda sucks we can't use him like he plays irl

Lmao or Patrick Beverley and getting in someone's face

I just wanna kick people in the nuts with my Draymond...

I wanna fight people and do kip ups with Marcus Smart.