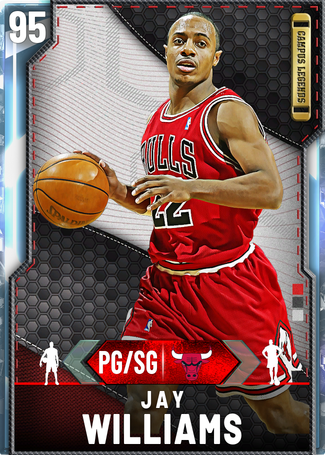 Bought for: pulled in a single pack

alright so this is kinda an update since my previous review was on the diamond version of him, I have since done his evo thing to get him to PD and I bought amy boozer so he can also have his duo,the evo makes him a 96 and the duo brings the 96 up to 98

Athleticism: Alright so this card is EVEN BETTER at athleticism now, he has 98 speed and 98 acceleration which lets him get past a majority of the cards in the game, he also has amazing badges that let him dominate

Outside Scoring:This guy is an absolute SNIPER from 3, his jumper is amazing, he has a high three point rating, he can pop the middy, and can even score consistently in the paint (a rarity for PGs that aren't tall as shit) he also has some nice badges that let him shine when it comes to shooting

Playmaking: So, you obviously need to guard him close to stop a shot or to stop him from driving, the problem here is that this card can snap ankles also so if you play even somewhat loose defense to avoid the ankle breaker, you are letting him either pop a three or get an easy dunk but if you guard him closely to stop the shot or drive, he can break your ankles then hit the three! How do you guard him?

Inside Scoring: If you see this card driving, get out of the paint ASAP. There is no way you can stop this beast if he drives to the basket. The best you can do is either try to contest it (will probably result in an and 1) or you can just let him do his thing. This is why you need to make sure that this card can't go anywhere. If there's even the tiniest gap in the defense, he can turn it into an easy bucket.

Defense: This card is a clamp god. He locks up opponents on the perimeter and can easily force a rushed decision by the opponent which could lead to a turnover.

Rebounding: He can't really rebound, which really isn't a bad thing since he isn't really meant to be a rebounder in the first place

Height: His height of 6'2" can lead to him being completely shut down on offense if someone's running a LeBron type player at PG because 2k said "fuck position locks"

Recommended Strategy: "Use this card to get easy buckets on offense and to force turnovers on defense, this is Jay Williams' world and we are living in it"

Other Comments: (optional) "This card is on another level of god like, what Jay Williams says goes"

Use if: "You want a cheap PG that can do basically everything on offense and clamp up on defense"

Don't use if: "You want a PG that can get boards (why would you want one in the first place?)"

Bottom Line: "OP as shit but can be shut down on offense by people running a SF at PG because 2k hates position locks"

Thanks bro I'mma cop him for my squad

I think he's best at PG but you do you

I run hornets playbook he been effective at sg