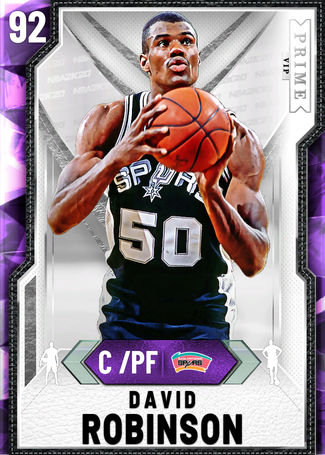 Get ready to see him a lot

Centers with jumpshots! MyTeam players favorite cards. You'll probably also see a lot of this card since it's actually a good one. Another really solid all around type of player that can fit into any roster. My centers need to meet a check list; good defense, good post game, rebounding and can hit a mid range shot. Having a decent 3pt shot is just icing on the cake. Fun fact The Admiral achieved the rare accolade of finishing a game with a quadruple double on February 17, 1994! One of 5 players in NBA history to do so. So you know he's going to have crazy stats.

Recommended Strategy: Pick n Pop/Roll. I run Bucks playbook and they have some 3pt plays for bigs (probably cause of Brook) so he does come off screens really fast for a center which gives him an open look after running to the 3pt line. That 80 speed really is annoying for defenders if you're running off-ball screen shots for him. Low post plays also work fine. Take a SF slasher and put him in the lineup, drive to the rim and collapse the D, if they leave the Admiral open he's got the shooting ability to make them pay for it.

Other Comments: I really do like this card. Half the time I get a defensive rebounding center and I forget their on the team cause I don't control them much. I don't usually play bigs in 2K so they have to be really fun cards for me call plays for and want to have them carry the offense. This one is fun for sure.

Use if: You want a center who can perform on both ends of the court.

Don't use if: I guess if you have a better card?

Bottom Line: 20K for card that feels like a diamond is a sweet deal.

Already seen this card a couple times. It's ridiculous. My Gheorge Meuresan couldn't even come close to guarding this guy. It's crazy.

It's a lot of fun to use, it's basically a diamond and it's cheap on the AH. I'm seeing this in everyone's lineups now.