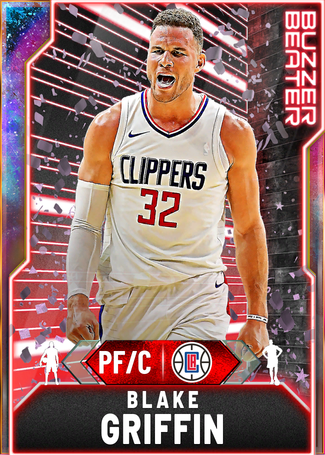 Blake Griffin is amazing, great buy for many reasons and his main one is because of his dunking. holy cow

Recommended Strategy: Drive even if there is someone like tacko fall in the way, if hes open take the shot always, get open with him beyond the 3 point line he will not disappoint.

Other Comments: He usually goes for 200k about, but if you can get him for 150-180k, I think you should pick him up, he is worth it and will make your team better no matter who you have.

Use if: you want a PF/C that is amazing all around.

Don't use if: You want someone with more playmaking and a better release form.

Bottom Line: Ive been hunting for this card since he came out, and he does not disappoint me when I got him, He is great and worth the money. If you have more then 100k I recommend him for anyone even to have on backup because he just makes your team good.

Great review, and thanks for posting it. I’ve been thinking about scooping him up but wanted to get some feedback on him before dropping that much MT. Thanks man!

ofc dude i was looking for reviews as well but he is one of the best dunkers and players in my opinion so i though to pick him up, but u should no matter who you have he is worth it.

His jumpshot is good but compared to Barnett... lmao, but yeh np Blake is a great pf he plays like a 7footer sometimes

Do you think as PF he’s better than Chris Bosh

Definitely, Blake is a cheat code in this game he literally dunks on anyone m. Awesome defensively too.

You think he’s a better shooter than Bosh

100% better than Bosh for everything