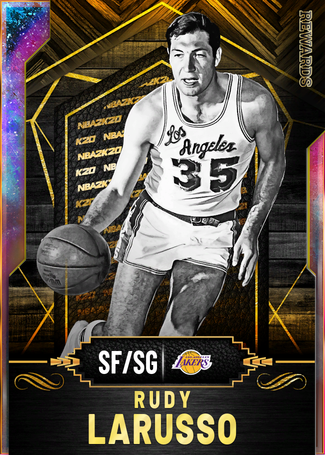 I was grinding some evolution cards in Triple Threat Offline when suddenly, I dropped this card from the vault. I didn't know what to expect because I didn't know LaRusso as a player beforehand, but I was in for a pleasant surprise.

Bought for: A lot of time spent on playing Triple Threat Offline

Recommended Strategy: Shoot lots of 3-pointers, cut to the basket, use your physical advantage in the post.

Fun fact: He scored 50 points in 1962, which at that time was the most ever by a Jewish NBA basketball player, in a game for the Lakers against the St. Louis Hawks. (©Kaws's Random Facts)

Use if: You want an all-round great player that's effective on both sides of the court.

Don't use if: You want someone faster, or perhaps even a more elite defender.

Bottom Line: If you have some free time to use and try to get him in Triple Threat, it's definitely worth it to go for it - I'd say he'd make most squads even better, as a versatile player.

How long did it take you to get this card?

I didn't count precisely, but I think around 80 matches.

How did you get a vid in the review?