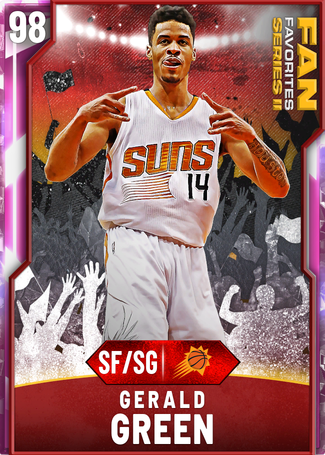 He's made his Return

Before I say anything, I must say this is bias. Not in the way you might think. Gerald isn't my favorite player or on my favorite team, but he's a legend. Not in the way you would think of Jordan, Kobe, Lebron, Brady, list goes on. He's a sports game legend, like Michael Vick in Madden 04,or like Pablo Sanchez in backyard baseball. He's been a God since 2K13, along with Terrence Ross, Andre Iguodala, and Kawhi Leonard. (Weird af list, but trust me)

This being said, enjoy the review of a demi-god.

Dunking: He's a dunking god. He's got 98 driving dunk and 90 standing, so anyone cant get nuts in the face. He's also got his usual animations, so expect tomahawks, front and reverse clutches, and windmills, along with baseline dunks. He's also got standing dunks as well and can catch lobs standing stull like a center would.

Shooting: Before I say anything, I have Stotts and a shoe that boosts mid range, so he's got +3 to three pointers and +7 to mid range, making him a sniper. 97 three and 96 mid range are insane in the membrane for Gerald. He's also got a quick and easy to get down jumper. (If anyone can tell me it, please let me know, thanks)

Athleticism: He's got 94 speed, 94 acceleration, 91 speed with ball, and 98 vertical. Speed might seem bad, but I never noticed him getting burned by anyone.

Handles: Once you get them down, he's got amazing handles. His crossover makes space like crazy and he has a quick behind the back move. he can also speed boost.

Defense: Okay, to be fair, he isn't bad defensively, he's just not amazing at it. I put it here since I didn't want there to be only positives to the card. That being said, he can hold his own unless it's a GO card. If you can user, he's not as bad.

Post moves: Who honestly cares? He's not Kobe (RIP Mamba) or Jordan, but I might as well leave it.

Recommended Strategy: Use him like how you used him in 2K13, 2k14, and every other 2K game.

Other Comments: Ant ideas on budget players to make reviews on?

Use if: You want a demi-god back on the squad.

Don't use if: You need Tony Allen or don't like having power levels over 9000.

Bottom Line: He is inevitable.

This is great. But his btb is definetly not as good as curry's

Oh yeah. The opal's size up package is different.

My bad bro. About to edit the review