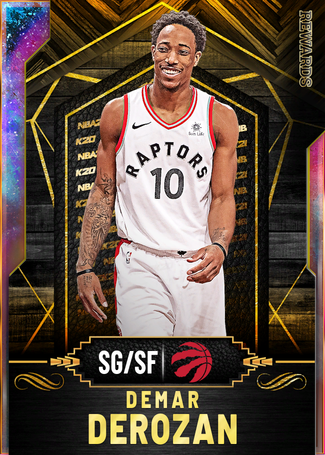 Bought for: 750 tokens and painfully long amounts of time in tto

-Shooting: Derozan was never really a sniper but it's 2k so who cares. This card has the Tmac release but personally I think this card has a better release than Lavine and Tmac himself (controversial I know). His off-dribble also is quite smooth and consistent. He also hits a good amount of whites.

-Dribbling: Smooth, that's the best word to describe it. I tend to dribble a lot (park player) and this card allows me just to do that, at first I was scared to get this card because it lacked handles for days but when the update came I was estatic and picked up this card a couple of hours later. His moves individually aren't exactly amazing but if you know how to combo you can blow by anyone.

Strength/ post game: Bullies other guards and has a deadly post fade which I think is better than most big men. Derozan isn't a pushover in the post with an 88 strength so he can kinda contain Kobe and Jordan if they resort to the post game.

Rebounding: This was a surprise because there's games where he'll let the big men rebound, then explode with like 5 boards but I suppose it depends where he is on the court because of his matchup. It's a different story with his putbacks because he'll start flying towards the rim getting ready to slam the putback but i'm not holding X because I don't expect it.

Defense: L-O-C-K-D-O-W-N. His lateral quickness lets you catch up with fast guards and his strength helps you get backed down less. Derozan has very long arms so this helps him get in the passing lane, steals, and blocks. Steals are a specialty and you can easily catch someone slippin and go into a fastbreak.

Doesn't really have one except the long time it takes to get 750 tokens.

Other Comments: Took over as the primary ball-handler who used to be KD Also I wouldn't mind some help with my lineup, I hate being that person lmao any advice is welcome https://2kmtcentral.com/20/lineups/197684/suggetions-plz-lmao

Use if: "You want an athletic all-around player

Don't use if: You don't want to understandably grind for 750 tokens

Bottom Line: Amazing player who should be given a try

I'm interested in the card but I already have Opal Harden and Kobe, is it worth replacing one of them for Derozan?

move harden to point and slide derozan in in my opinion

I would consider it because if you like Tmac clones like Brandon Roy or Tmac himself you'll like this card, if he was auctionable he'd be like 400k+ so there's a chance you'll like this card more than Kobe. Derozan is extremely effective on offense as a primary ball-handler so if you're looking more for a second option on your lineup I would go Kobe personally.