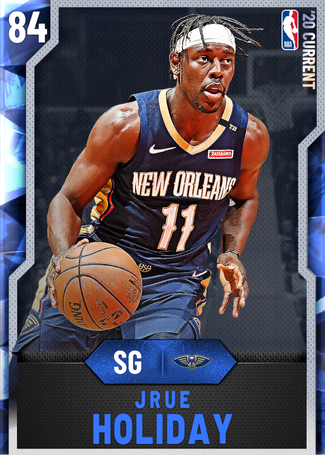 Very solid sapphire. Can make shots, and clamp on the other end of the court. Good budget two way player that can defend the opposing team's guards very well. His jump shot release is a little bit slow but not too bad. Not gonna be the best player on your squad but he's a good utility player that, as I said, is cheap.

He's also Damian Lamonte Ollie Lillard's father. Dame fears this man ever since he got an absolute spanking in the 2018 playoffs as Jrue, AD, and Rondo swept the fail blazers easily, proving Jrue is just the better guard than Lillard and further proving that Dame Dollar Store is an overrated playoff choker. Dame's playoff career failures are minimized by casual fans thanks to the two iconic series winning buzzer beaters he's had, but don't be fooled. He's essentially had 2 good playoff series, both in just the first round, and choked in every single other of the 10 series he's been in. After getting carried by CJ McCollum and Rodney Hood, Lillard still almost choked his way into a series loss to the Nuggets but his team prevailed as they made the conference finals. It was then and there that Dame choked once again, this time with nobody to carry him as his teammates did not do enough for their "superstar" point guard. And Lillard did what he does best. Getting swept in the playoffs. And the Warriors didn't even have Durant. Sad.

With that being said, Jrue Holiday will always be the ultimate symbolism of Damian Lillard being an overrated choker who always gets clamped by above average defensive guards in the playoffs like Chris Paul, Mike Conley, and Jrue. Pick up this card, and anybody who has Dame on their team will immediately start choking.