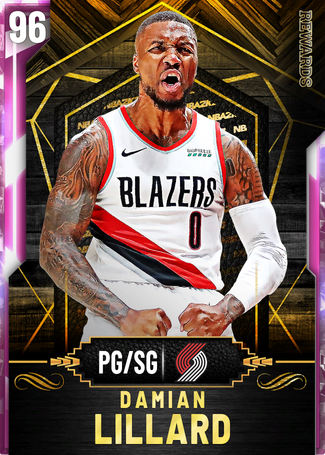 I'd say pass on this card. The reason is because Damian Lillard is, frankly, overrated. He has been for most of his career. This card itself is pretty great, a 60 point game in a loss. Cute. But using this card is supporting a choker and that is just not okay for the integrity of the game of basketball! He's a bad luck charm. Use this card and expect to choke the biggest of myteam unlimited games.

2014: makes buzzer beater against rockets, people then for someone reason thought this man is clutch all the sudden. then completely chokes against the spurs second round.

2015: gets clamped by mike conley with one eye (conley was dealing with an eye infection) and loses to the grizzlies in 5 as he plays like complete shit.

2016: gets completely sonned by chris paul. goes down to the clippers 2-0, then lucks out as chris paul and blake griffin go down with injury. blazers win 4 straight games and advance to choke to the warriors in 5 next round as lillard plays like a giant turd.

2017: gets swept by the warriors first round as he shoots poorly from three and gets carried by cj.

2018: gets swept first round again, this time even with homecourt advantage, to the pelicans as lillard completely embarrasses himself as the combined efforts of jrue holiday, rajon rondo, and anthony davis completely shuts him down. dame then focuses on what he's better at over the summer: rapping

2019: lucks out to play a thunder team with paul george and russell westbrook both playing with shoulder injuries that they had to get surgery for over the summer. wins in 5 (should have swept them tbh) and hits another series winning buzzer beater that gave off the pseudo-effect to fans that he's somehow clutch because he hit two lucky shots. then he moves on next round where he wins in 7 against the nuggets. but don't be fooled. dame choked, and got carried by cj mccollum and rodney hood. sad! then he chokes again in the conference finals to a durant-less warriors team as he gets swept. keeping track? that's 3 years in a row where this "superstar" and "elite" and "top 5" point guard has gotten swept in the playoffs!

this season so far: blazers are looking like they won't even make the playoffs. dame just had a 9 point game. he's hitting rock bottom! but he did have that 60 point game in a loss. that's cool i guess.

OPEN YOUR EYES. DAMIAN LILLARD IS NOT A SUPERSTAR. HE'S NOT EVEN A STAR. IF 2K DIDN'T OVERRATE HIM, HE'D BE ERIC BLEDSOE WITH A SOUNDCLOUD AND A BRONZE LIMITLESS RANGE BADGE

By any chance are you a Rockets or Thunder fan?

Are you serious? How can you despise Lillard that much lmao

Dude when Aldridge, Matthews, Batum, and Hickson were all good and dipped, Dame was the only one to stick around. That man is the reason y’all even make the playoffs in the first place don’t even lie lol. You’re saying w/o dame, the all nba first point guard (shoulda been curry ik lol), y’all would be good?