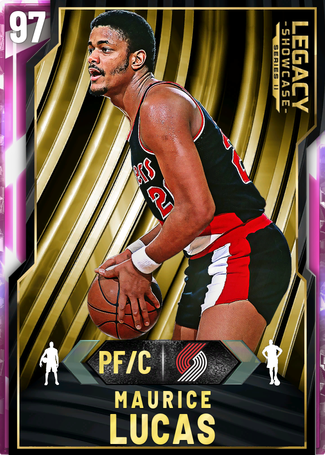 Bruh everyone is sleeping on this card. Obviously the Legacy Promos have been some of the most disliked and underwhelming packs, as they’ve been releasing players that either played too long ago for people to care, or they’re cards that have come out in every 2K annually (or if you’re Mark a Price, they’re repurposed token market cards). However, all of the cards (least from what I’ve seen) can perform rather well (I still have Mikan and he’s a beast). This Mo Lucas is seriously no exception.

Recommended Strategy: Pick and roll/fade, operate from the post, but seriously, play him at the 5 (unless you have that PD Duncan (that card is flames)). He can hold his own and more against even the toughest bigs, and he’s a little slow to guard those SFs that play the 4. He serves way better as a paint protector than a perimeter defender (however he can defend the perimeter well if you know how to run an effective zone).

Use if: You want a weirdly cheap and athletic paint protector who doesn’t limit your floor spacing

Don’t use if: You prefer a 3 at the PF spot, need a marksman for your big, or have a better/sufficient center. Acceptable answers include PD Timmy, Opal D-Rob, Diamond Mikan, Diamond Gilmore. Unacceptable/ fuck you answers include EVO LaFrentz, Ruby/HC KAT, Sapphire Muresan (ik it’s a budget grind for some, and if that’s your case I understand, but there are tons of goated squads who find a way to five out and kill with these stretch bigs (fuck those guys)). Tbh I gotta chill w the parentheses lmao.

Bottom Line: This was a long review, so to those that read all of it for whatever reason, I truly appreciate it and would love any feedback on how to be more concise. Back to the point: This Mo Lucas card is multi-faceted, very affordable, and (I can’t emphasize this enough) a lockdown paint protector. Pick him up if you have even the slightest doubts about your center.