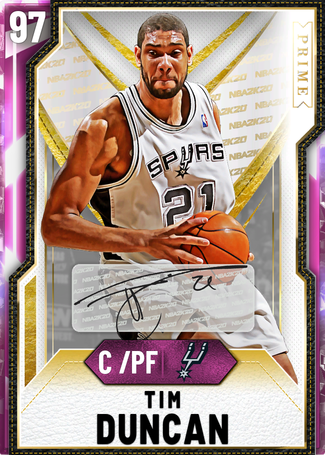 I'm a huge Duncan fan, so after hearing about how awesome this card was, I decided to drop most of my MT on him. I was wildly dissappointed, and he routinely had some of the worst stats on my team in Unlimited. I ultimately resold him and went back to a Love/Mutumbo front line, with Lucas/Gilmore off the bench.

I score a significant amount in transition, and he just doesn't fit that play style.

Recommended Strategy: Slow it down and play through the post.

Other Comments: He was pretty awesome in the few games of TTO I played with him, and racked up points, rebounds and blocks. However, the improved matchmaking this year means you don't need to use highly rated cards there.

Use if: You like to abuse opponents down low.

Don't use if: You like to play in transition or want a stretch big, even though his stats make him look like one.

Bottom Line: A good but not great card, so not worth the price this early in the year. I sold him back for almost 400,000 MT, so at least I made a very healthy profit!

My experience with him is the exact opposite of yours. I get about 12 rebounds and 3 blocks a game from him. And he dunks on everyone.

What other bigs do you play him with? I wonder if Mutumbo/Gilmore just overwhelmed him in my lineups, since they're both 7'2" with great rebounding stats.

I really wanted to like this card! I'll probably pick it up again in a few weeks when we get Prime super packs and the price drops.

I surrounded him with shooters and use the 95 Magic offense. I use Brad Stevens also. Has been a monster for me.