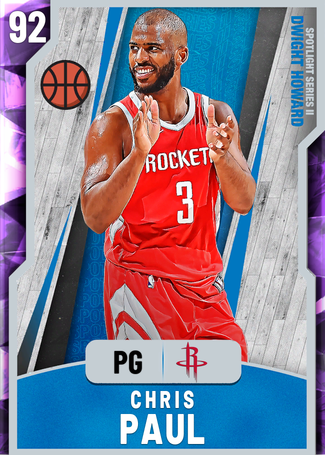 You know I had to pick up my favorite PG of all time. CP3 does work. Defense, playmaking, dribble bully and circus layups around bigs. This card is great. But most importantly of all HOF Dimer and Floor General! It's nice seeing shot percentages of your teammates. If you have some solid players like Giannis, LeBron, Luka, Mashburn, Lou or any offensive beast you need a Chris Paul. Take Lou Hudson at SG and let CP3 run a combo guard with him and that HOF Dimer and Floor General boost their stats and shot percentages like crazy. Get all the assist you can cause if you set up a dime from him your shot has a better chance of going in. Lob City with LeBron and Giannis is lethal. He can also carry some of the offensive load, running ISO dribble moves to break down defenders and drive to the rim to use that gold Bail Out and Needle Threader to set up an easy pass after the defense collapses in on you. Or use that HOF Giant Slayer to slither around bigs to get your buckets. ISO shot creator to dribble pull up after shaking the D off is fun. This is a Swiss Army knife at PG.

Recommended Strategy: Abuse that pick n roll or pop if you have a stretch. ISO, drive n pass. Screen and shoot behind the bigs worked better than I thought it would. Run plays and have CP3 facilitate the offense.

Other Comments: He has some nice 3pt plays that get him as open as possible. I did run some guard post ups since his post moves are 68 so he was able to do some nice post spins and fake drive mid range pull ups.

Use if: You need a playmaking, defending, shot creator who can do a little bit of everything.

Don't use if: You really don't like short PGs.

Bottom Line: His price is only 25k which for one of the few defensive minded PG's is not too bad. There's not a lot of good defensive PG cards out right now and a ton of good offensive PG's so this is super valuable at the moment.

Got this card cause of this review and hes so good! best budgety pg. great review

Thanks, yeah his playmaking is super valuable. Makes good cards even better.

True. not to mention hes a thief on D. Hof interceptor is clutch!