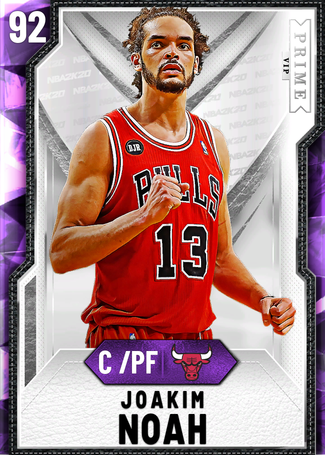 Board man gets paid

Finally a defensive monster I can replace my Tyson Chandler off my bench after all this time. And he is a defensive monster. If you're having trouble with slashers Stick will be a great option to pick up. Nothing is more valuable than a glass cleaning paint defender even if he is 6'11. The height isn't much of a problem unless you're up against diamond Dikembe, rebounding up against him is always going to be trouble. But if you're looking for a solid piece off the bench who can hold things down... and you don't really use offensively minded bigs then this is a great choice.

Recommended Strategy: Do what they told Robin Williams in the movie Jack, "just stand in front the rim and put your hands up." He will not give people easy buckets. Brick wall pick n roll situations are his bread and butter.

Use if: You want a DPOY MVP candidate that will be your defensive anchor.

Don't use if: You need offense

Bottom Line: It's an Amethyst for 5k MT it's not a bad deal.

I absolutely love Jo. He's causing me all sorts of lineup angst b/c I just don't want to replace him but all these "sexier" options have been popping up. I'm committing to him long haul in the same way I am with Bowen. They spark joy for me in my lineups.

I'm starting Robinson just cause he's the perfect C for me. But Jo off the bench is the best. Bogut's Amy doesn't have the same defensive stats or offensive rebounding stats, Jo is way faster. He's a great option, I can't see him being replaced for a while.

Good review, and I have to agree on the most part. I personally don't find his release completely unusable, so with a dimer pass you can definitely take the midrange if there are no defenders nearby.
I have to say, this card is a beast. And I'm only 400 points and 200 rbs short of EVOing him.

I tried setting him up with CP3 and even that didn't work. But maybe it's just me but the release feels awkward. Nice job with the Evo, once I'm done with Jrue I might go back to Jo.

No Fucking way is he a 5 star. He gets called for a flagrant foul every game.