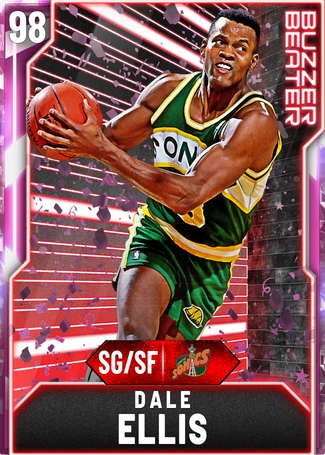 Don't sleep on this card!

For a budget and cheap player Dale is a 5 star but in terms of opals that are out and everything comparing them to him he's a 4.

-Defense: No-one can get by him he always makes the opponent pick up the ball and with the 80 strength, he's not the easiest to out-muscle. Dale always does extra to like boxing out (even more than Tacko) and correctly closes out the shooter that's open and always gets long rebounds . Little things like that really does make a great defense, the crazy part is that he doesn't even seem to stand out as a crazy defender like Jordan it's kinda hard to explain.

-Dribbling(sorta): Dale has the pro 3 hesi which is shifty and hard to guard but a slow behind the back and a great crossover. Overall he's not that bad but he doesn't exactly seem to explode like a Tmac or other guards. But then again, that's not really his role.

Recommended Strategy: Hit for an open shot and to guard one of the difficult players

Use if: You want a good 3&D sharpshooter

Don't use if: You have an absolute god squad and have Paul George and Tatum or something idk

Bottom Line: Amazing value and could be used for any squad at any level

In case nobody knows, you can boost his and really anyone's dunk from 80 to 87 with Stotts and a shoe.

The head coach for the Trailblazers