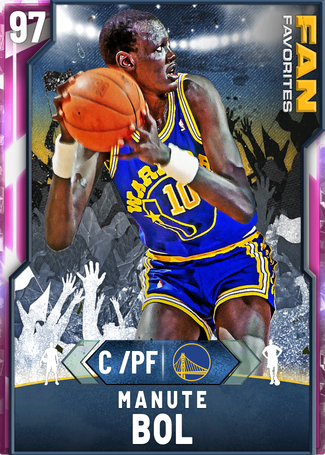 MANUTEEEE BBOOOOOL. What’s going on guys time for me to make another review just for some little kid to tell me I’m wrong because he doesn’t have (insert random badge here). Guess what little man? Manute has gold clamps and gold quick draw!!!! Is that good enough for your tiny brain? Good. Anyways I PERSONALLY think Manute is a great center, even though I run him at pf cuz gotta have Yao at center even though he’s bad bc he apparently doesn’t have clamps and centers need clamps now bc 2k is 2k like whatever. Manute is obviously juiced, but it’s some apple juice bc that shit goooood.

Bought for: idk man, some MT

Recommended Strategy: Pick and pops, corner hoe, run him at pf so he can space the floor on offense and clam up the paint on defense like a line for a Disney ride in the summer. Has only 80 strength so better at pf than center, not a weakness though

Use if: You can play the game without having the entirety of the player abilities maxed out

Don't use if: You don’t like having fun or you need every badge and stat in the game

Bottom Line: If you’re gonna tell me I’m wrong about something in this review and he’s unplayable because this stat isn’t high enough or this badge isn’t HOF or whatever, do me a favor: Turn off your phone, set it down, get up, walk up the stairs out of your clammy basement, walk outside, take a fresh breath of air, and go do something :)

Manute has the sixers record for most threes made in a half with 6. Pretty certain he deserves 83 three lol. Great review!

You got Yao and Manute? Good God how can people score in the paint lol. I do agree though, the people who complain about not having every single badge are kinda weird.

manute is a good card

The only reason I don’t think he would be amazing at c is bc he only has 80 strength, he might get a little bullied but also he has better shooting stats than Yao so I run him at pf for those reasons

He’s not beefy though, you get me? 2k gave him 80 strength anyone with higher strength and/or backdown punisher will just Post him up and there’s not much to do except hope you contest the shot yknow?

Yeh I get that