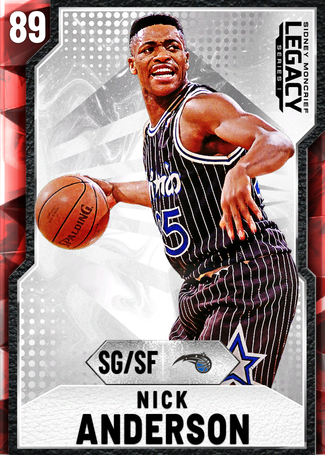 So, I didn't see a review for this guy, and I've used him for a few months now and feel like I've got a pretty good feel for this card. I still run him as a starter (2 guard) on a diamond/amethyst team over like 5-6 other 88-89 comparable 2 guards because I like his release and mix of strengths weaknesses more than the others. Used as almost pure C&S floor stretcher at this point but earlier on as a more well-rounded scorer.

Recommended Strategy: Pair with athletic rimrunning PG and drive and kick out to him as a 3 pt sniper. Also good to use as a secondary shooting option in perimeter centric offense

Other comments: Can hang offensively with amethyst and some diamonds, but on D only up to amethyst - most diamonds will cook him. Diamond and up competition he basically becomes C&S only, but can still be effective there if you use him like I do as a floor stretcher. Good budget guy (prob like 1500 mt, can't be much) for people that want a knockdown shooter or a scorer against ruby and below comp.

Use if: See "Bottom Line" section

Don't use if: You want a shooter that can create his own shot

**Bottom Line: Great value for mt, nice player to use while building up your team, or as a floor stretch C&S role guy on better teams with slashers