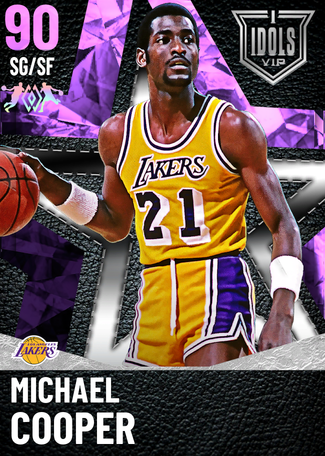 Decent, But Not Great.

I was recommended to review Michael Cooper as he is a budget amethyst who looks pretty good for the price. My first impressions on offense were that he was too slow, and couldn't really dribble in transition. He can knock down shots and has a decent release but for a shooting guard that's not asking much. On defense he still got beat by taller players. I wouldn't use him in either Triple Threat as he is small and slow, and should not be your primary ball handler. I loved Cooper in previous games, but I think he needs better dribble moves and handling to be an elite player.

Recommended Strategy: Spot up, avoid dribbling, put him on the best offensive player below 6'8 and he should play decent defense. Never put him at Small Forward.

Use if: You want an elite defending shooting guard

Don't use if: You need a fast shooting guard who can dribble and run the floor.

Bottom Line: He is worse in my opinion than Ruby Eric Gordon. For 10k, I think he plays decently, but I would start Gordon over him who goes for only ~2k.

Edit: Upon further testing, I have raised the review to 4 from 3 due to his defense and shooting/finishing ability.

Finally got to test Michael Cooper out! He was recommended as a good budget card to use and this is my honest review of him. I may update it as I use him more as he is obviously an upgrade to the sapphire Deshawn Stevenson I was using previously off the bench. Let me know what budget card I should review next! I am open to suggestions! Also, be sure to check out my other reviews!

What I mean is against a CPU yeah hes pretty dang good, but his height and speed don't do him any favors. Defense in 2k has always been weird. I find that people just get him to switch onto a big man and then his 6'5 height and 65 strength are the problem. From actual tests hes just a solid defender but not really OP.

hmm HOF Clamps is huge though. 6'5 at SG isn't ideal but it's fine right now. If you play the right defense he won't be switching onto centers

good review, also add he can get QFS, i wouldnt add steals as weakness because he has a 85 steal

I found that when I try get on ball steals with him, he fouls way too much, more than my other guards. The first few games I played with him he got into foul trouble.