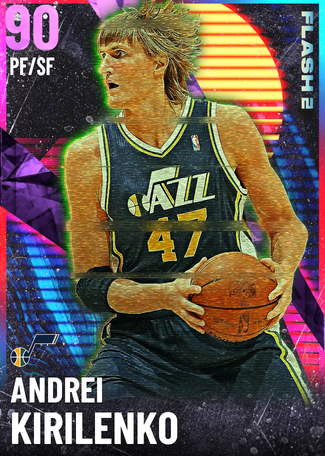 Yes I know you saw the title D-and-3 when we usually call cones 3-and-D. But that's what this guy gives you, incredible defense and the ability to hit open shots on the other end. The 2K19 GOAT is back, but 2k nerfed him sadly. Still a good card, he's on Diaw level in my opinion.

Bought for: Was overpriced early but settled at 15k

Recommended Strategy: If you don't have a good defensive PG he can match up to them, don't be afraid to switch on screens(AK can defend big guys), have him pull open shots. CONE.

Other Comments: A Bobby Jones that can shoot

Use if: You're looking for a good PF or SF who can play elite defense and hit open shots.

Don't use if: You have more MT or hate his release.

Bottom Line: Not as bad as people say, but not worth the MT right now.

Shooting is a weakness but “Decent” review.

No shooting badges. None.

ya i mentioned that no CAS hurts a lot

? his d is better than diaw's worse shooting worse sigs and stuff but still

yes that's why it's D then 3. wish they gave him last year's dribble sigs...

yay! Ak might be a competent card with that base! good review!

oh yes i am sorry

ya i disrespected andrei kirlenko

fax SOMEONE finally gets it

FAX! if u can get his release down this card's a beast. I'd still say diaw or howell is better value though

good review, hes 22k rn, add that he has a horrible layup package and he feels slow he is the best defensive card i have used this year by a mile tho

idk he just misses lots of layups and feels slow

ok you used him so I guess, i'm certain DBG said he felt fast in a gameplay though and default swing is good might've just been a coincidence for you

Idk he just was trash on offence

did you like or not like his release? it's quick. he kinda cocks it back though and it looked weird to me much different than LA base

yes mosballin
got him in 3 yes 3 picks

I like shooting centers tbh i'm too used from 2k20 to pull the 3 with anyone on my team. like bargnani.

I never shoot with centres I prefer defensive and rebounding

Isn’t amazing inside, at d or rebounding tho

you just said you like defensive centers more lol

I like people that can shoot just so people don’t off ball not that i shoot with the tho, you can’t have that rn tho with my play style

yea pd lanier can shoot middies quite well which is nice

yea lol did u add intimidator

Should I have done it to Lanier???

But Lanier will be outdated soon ish

Yes till February at least

true only like diaw and howell but if you big baller guys like diamond PG work. and of course the myth himself timmy d

Nah not gonna get him hopefully I can get love, diaw and Howell are fine for now but will be outdated quick

yea i mean howell is still a great cone and diaw is too with pro 3 btb. but better cards coming for sure. i heard howell is expensive now so I think you should consider selling

yea you could. hopefully you get lucky on ascension again though

Yes I have 2 more I think

Wtf how would that help lol

He might be the best AI defender in the game. He attacks offensive players.

I mean his defensive tendencies are kinda bad so idk what you mean, the new diamond is out though he's insane.