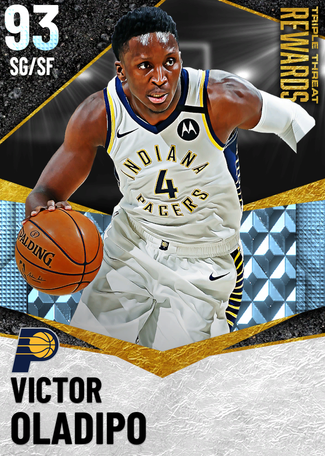 This is a tough grind

Price: YOUR GODDAMN LIFE (no seriously its 450 wins on triple threat offline and its not that its hard its just painfully boring but anyway)

Strengths Dunking: this card is a tank when it comes to dunking 95 driving dunk with hof contact and hof relentless and 85 driving and flashy dunk tendency's makes him an elite dunker not to mention that he has gold acrobat slithery and fancy footwork

SHOOTING: I'm not ganna lie this man release is a little weird little off putting but its fast and get the job done once you know it. but this guy can shoot with his 88 3pt shot and his wide variety of good badges such as hof tireless gold cluch hot start and difficult shots makes him not an elite shoot but a good one at that when hes open and with this paired with dunking makes him an offensive beast.

PLAYMAKING: now this is more my personal belief about this guys dribbling (since everyone dribbles differently) this mans handles are fast with a 86 ball handle meaning he can speed boost makes him able to iso and i believe his dribble sigs are perfect for my type of playstyle (this may vary for how you feel bout dribbleing)

DEFENSE: Imma say this right out the gate he has 92 peremeter D and gold claps What else do you really need well 2k thinks you need PICK DODGER HOF, CHASEDOWN GOLD, POGO GOLD, PICK POCKET GOLD, HEART CRUSHER GOLD, AND TIRELESS DEFENDER GOLD. (there are more but im just putting the important ones) oh and did i mention he has a 90 contest shot ? bc he does. he also has a 58 interior but i mean they wont have to to get to the paint with gold clamps soo yea

POSITION: He plays sg/sf and i feel like this hinders his ability's just a bit while yes sg is good and all hes only 6'4 and it would be alot better if he ran pg with how all around he is but this isnt something we can change we just have to play with it so put him at sg bc if you have him at sf that 58 interior will kick in and while its not a bad interior rating its not ideal seeing that there are better sf out there that do the job better.

ONE MISSING BADGE: this man almost has everything he need i mean he has badges some pg or even centers (with gold chase down and pogo) dont have but the one thing he doesn't have is qfs with qfs this card would have been nearly perfect and you think for spending 450 games worth to get this card 2k would throw us a bone but no they wont so hes still good without it with 88 speed but it would help.

My strategy: Play him at sg and personally if you dont have a fantastic pg run the ball through him he can do it well and i can get some good plays done with him.

Use if: you have the time to get him hes ganna be good for a while even though i got him late since the new season is in like 3 days so.

Dont use if: you have a life bc youll spend wayyyy to much time trying to get him too me 3 solid days without sleeping and yea.

Bottom line: hes a great card that has a massive wall of grind for it but the one question i get from people was is it worth it and for rn in this state of 2k where we are just breaking into the norm being from amys to diamonds i thinks so.

wow good review, why did you grind him hes not that good,@Nba2kGod11

why'd you tag me lol this is a great review though. he can't get QFS so not good imo, not worth it.

Got to tag the review god

imagine grinding for him though... and realizing QFS can't be added lmfao

yeh i am at like 150 wins from grinding xp

oh I don't think Imma play it much in the future...
mainly playing tt online rn. I want to try Limited one day it looks kinda entertaining and actual fun

oh lol do u think playing unlimited is worth it or limited? cuz limited u have to buy a ton of players and sell so ur losing MT too.

u have to have each and every one of your 13 players satisfy the week's requirements right? you have to buy players then which I don't really want to do...

i only have to buy 1 or 2 and i just run a 10 man, KEEP ALL ORIGINAL OWNER CARDS

why keep lmao I would have to buy more cuz I don't have as many cards as you.

actually nvm unless u wanna grind xp or do the exchange

no, I just had no idea what to do with the duplicate FA dame card

i sell them for 1mt

yes why tf would 2k make it only 1 MT smh

yea finley this season is okay

he's pretty much useless on your team, just saying.

lol. idk if I could put him at backup SF

ya I mean didn't you say you hardly used your bench anyway? you could get hedo idk

I want to use good reward cards to make my bench look good.

lol rafer is pretty good for sure you should use him that release is insane. I mean sure because your starters are good enough

but for a big grind he isnt that good

@Dylzy05 sorry ment to tag u in the first one